"Boss... Boss!"
―Keshigomuloid after Enter abandoned him as a failed Metaloid.[src]

"I'm being erased... boss."
―Keshigomuloid after being hit by a shot from Ichigan Buster and his final words.[src]

Keshigomuloid was created when Enter infected an eraser with the "erase" Metavirus at a school. For unexplained reasons, Keshigomuloid did not assume human-size like other Metaloids usually do and remained at the height his object was. Wanting to receive his creator's affection after being abandoned as a failure, Keshigomuloid hitched a ride on an unsuspecting Hiromu to erase the digital contents within the Energy Management Center's headquarters and the Buddy Roids.

Despite his size, Keshigomuloid uses his powerful laser and head butt attacks to defend himself from Kuroki and Morishita before being blasted to bits by Red Buster with a normal shot from his Ichigan Buster as he was about to attack Nakamura. 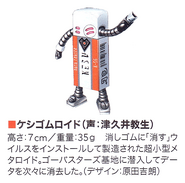