Kenta Date (伊達 健太, Date Kenta) is MegaRed (メガレッド, Mega Reddo) of the Megarangers. He is an 18 year old (19 as of Gingaman vs. Megaranger and 32 as of Gokaiger) former student at Moroboshi High School.

Fourteen years later, he was working at Moroboshi High at age 32.

Kenta hung out at arcades during his high school years, becoming a professional at various games, most notably the "Megaranger" video game set up at his local arcade by I.N.E.T. When his potential was recognized as a possible Megaranger, he was recruited by the head of I.N.E.T. for further study and then become one of the potential heroes. However, a pre-emptive invasion by the Nejireiga forced Professor Eikichi Kubota to immediately give a Digitizer to him and to four other students who were investigating the strange occurrences at I.N.E.T., making them all into the Megaranger team.

Although lacking in grades, Kenta was brought into the "Digital Research Club" set up by Kouichirou due to their connection in being Megaranger. However, he immediately was more interested in keeping Shun on the team after he nearly turned it down to focus on his extra-curricular computer studies.

TV STORY-Ep. 3: For Real! A Huge Nezire Beast He is also the only member who doesn't like computers (which, ironically, is his personal crest).

After his Drill Saber was broken by Yugande, MegaRed received an enhanced version of the weapon that can combine with his Mega Sniper to form the Drill Sniper Custom.

In episode 19, Kenta and the other Megarangers responded to a nighttime disturbance where they found Neijirejia's new general Guirail abducting a group of children. Unfortunately, as he launched himself at his new opponent, Guirail used his speed to switch places with Kenta's friend Takeshi, resulting in Takeshi taking the punch meant for Guirail. Overcome with guilt, Kenta announced to the others that he would resign from being a Megaranger. In an attempt to change his mind, Prof. Kubota took him to a boxing gym where he showed Kenta a boxer who was about to reenter the ring after a traumatic fight where he accidentally brain-damaged his opponent. Inspired by the boxer's resolve and Kubota's urging to make sure that another innocent like Takeshi was never victimized by Neijiregia, Kenta agreed to continue being a Megaranger at which point Kubota gave him a new weapon, the Battle Riser, just as Guirail launched a new attack at a major communications center. During the battle, Kenta still found himself unable to fight, especially as Guirail began using illusions of Takeshi to further torment him. Luckily, Takeshi recovered and with Prof. Kubota's help, sent Megared a message assuring him that he didn't blame him and urging him to fight, restoring Kenta's will and allowing him to defeat Guirail.

MegaRed is among the Sentai warriors seen in clips when Yuusuke Amamiya (Red Falcon) lectured Gaku Washio (GaoYellow) about the past Sentai sword experts, showing him that the true sword wasn't the sharpest, but the one that feeds on courage.

Led by his Liveman predecessor Red Falcon, he appeared as one of 24 previous Red Rangers in Gaoranger vs. Super Sentai together with fellow Red Rangers from his predecessors Akarenger to Red Racer to his successors from GingaRed to TimeRed. He had no interactions with his former teammate Miku, who also appeared, but alongside the Dream Sentai instead.

Kenta's appearances in the "Versus Series", Megaranger vs. Carranger and Gingaman vs. Megaranger, are featured in the Super Sentai Versus Series Theater, hosted by the heroes of Tensou Sentai Goseiger. Alata (Gosei Red) also dresses as Kenta in the Megaranger cosplay.

As the twenty-first Red, MegaRed's Red Warrior Spirit was embodied by AkaRed.

Years later, Kenta fought alongside not only his own team but every single Sentai ranger in existence, against the Empire of Zangyack when it attacked the Earth in the Great Legend War. After fighting against hundreds of Gormin and their Zgormin commanders. Kaijou noticed the fleet moving towards them, he gathered all the Rangers together and gave them the order to sacrifice their powers to wipe out the first invasion's armada. The MegaRed powers are later used by Captain Marvelous via the Ranger Keys.

In Kaizoku Sentai Gokaiger episode 39, Kenta returns, having been revealed as a teacher at Moroboshi High, the school he attended when he was part of the Megaranger team. When the Gokaigers arrive in search of the Megarangers' Greater Power, Kenta makes them attend the school before giving them the power. Though Basco ta Jolokia attempted to take the power from him, the Gokaigers were able to protect him and gain the power accordingly.

After the Zangyack's final defeat, Marvelous returned the Ranger Keys to their original owners. It is assumed Kenta and his team have their powers once again.

Kenta, alongside his team (bar MegaSilver), among the majority of the Super Sentai heroes, was caught up in the "Super Hero Taisen" incident which eventually resulted in the Super Sentai teams and Kamen Riders joining forces to defeat both Dai-Zangyack and Dai-Shocker. During the final battle, he is seen in the background fighting a Gormin.

MegaRed appeared as part of a conference of the first 38 Reds led by Red Falcon, who addressed the Ninningers and Zyuohgers as the greater Super Sentai pantheon intervened to save them from defeat at the hands of the titanic Gillmarda. Empowering the Combination Nin Shuriken to form Wild Tousai Shuriken King, the first 38 Super Sentai further imbued their successors with the power to perform the Zyuoh Ninnin Super Sentai Burst, destroying Gillmarda with the combined power of all 40 Super Sentai.

An iteration of MegaRed from the Game World

Alongside MegaSilver, MegaRed was a candidate to join the Space Squad

Kenta joined the Super Sentai Strongest Battle as a member of Big Eater Team. It’s unknown whether he participated in the match, but his team was eliminated after losing the first round against the Gilded Team.

Kenta alongside with his Sentai Red Ranger predecessors appeared to help the Zenkaigers.

Kenta is a bit of a slacker and a knucklehead who loves Korean barbecue, but he is friendly, playful, and goodhearted.

As MegaRed, Kenta's crest is the computer which enables him to upload data and progam himself with any type of skill; making him a potentially omnipotent warrior. In fact, on the business card that he used to present himself to the Gingamen in Gingaman vs. Megaranger, the card itself states "Ten-Thousand Ability Warrior". 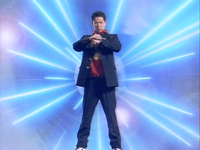 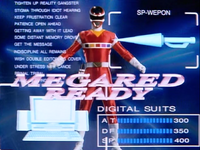 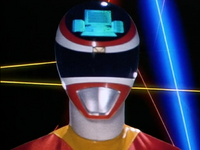 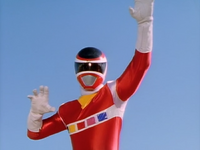 Kenta, along with Kouichirou, Chisato, and Miku, disguised themselves as MegaBlue in an effort to fool NejiBlue.

The MegaRed Ranger Key (メガレッドレンジャーキー, Mega Reddo Renjā Kī) is Kenta Date's personal Ranger Key and what became of his powers after he along with the rest of the 34 Super Sentai sacrificed their powers to end the Great Legend War.

This key along with the majority of the Ranger Keys were collected by the Red Pirates and later used by the Gokaigers. The MegaRed Ranger Key was mainly used by Captain Marvelous (Gokai Red), who used it to fight as MegaRed. It was also used by Gai Ikari on one occasion.

The Megaranger keys, along with all the Ranger Keys of the first 33 Super Sentai, were briefly taken by the Black Cross King and turned into Ranger puppets that were fought by the Gokaigers and the Goseigers. Splitting up, the puppet MegaRed was defeated as part of a group of surviving Red warrior keys by Gokai Red and Super Gosei Red.

After Zangyack were finally defeated, the Gokaigers gave the Ranger Keys back to their rightful owners. Kenta received his key and became MegaRed once more.

A Megaranger Zyudenchi which bears the likeness of MegaRed is part of the Legend Sentai Zyudenchi toyline which can be used in Super Sentai Battle: Dice-O.

MegaRed appears with his team in the Denji Sentai Megaranger video game.

Kenta Date/MegaRed: to be added

MegaRed is among the vast pantheon of Rangers which are available in the mobile game Super Sentai Battle Base, with his Mega Tector upgrade being available as well.

MegaRed appears with his team among all Sentai in the mobile game Super Sentai Legend Wars.