He is known for his role as Retsu Ichijouji (Space Sheriff Gavan) in the first Metal Heroes series of the same name as well as in the Gokaiger vs. Gavan film. He also played one of Shurikenger's human forms and appeared in the Juken Sentai Gekiranger as Dan, the father of Jan Kandou (GekiRed). He also appeared in Kamen Rider Black RX as Shou Kujou and in one episode of Sekai Ninja Sen Jiraiya as Yajiro Iyo. 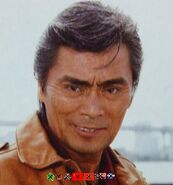