Kendrix Morgan is the first Galaxy Pink of the Galaxy Rangers. Kendrix is also the first Power Ranger to die in the line of duty.

She is also referred to as Pink Galaxy Ranger or Lost Galaxy Pink Ranger - variations on her in-show label, though the latter is more in reference to the show than a proper label.

Kendrix was introduced as a science officer aboard the space station Terra Venture. She was one of the six people to travel through a spatial rift to Mirinoi in the first episode, and she drew a Quasar Saber that allowed her to transform into the Pink Galaxy Ranger.

Kendrix became the first Power Ranger who has ever been killed, sacrificing herself to save Terra Venture and the powers of Cassie Chan, the Pink Space Ranger.

When Karone was thrown off a cliff by Trakeena, Kendrix appeared as a spirit and passed on her Morpher (and with it her powers) to Karone, who promptly retrieved the Quasar Saber from Trakeena and helped save the rest of the Rangers. When the Quasar Sabers were returned to Mirinoi in the finale, Kendrix was restored to life by the magic of the Quasar Sabers placed in their stone. It was not seen when Karone returned her Morpher to her, but it seems likely as Kendrix appeared again with her Galaxy Powers in the following show.

In Lightspeed Rescue, Kendrix became the Pink Galaxy Ranger once more and joined the Lightspeed Rangers in defeating Triskull and Trakeena. She then returns to Mirinoi.

The Galaxy Rangers were featured in a chronicle of Power Ranger history compiled by Tommy Oliver shortly after he formed the Dino Rangers which was found by the nascent Ranger team in the Dino Lab.

Kendrix as Galaxy Pink summoned among various evil Rangers by M. Bison's side, She appears with the Black Dino Ranger and prepare to fight the Green Ranger, Super Megaforce Yellow Ranger, Ryu Ranger, and Chun-Li.

She did not appear in Super Megaforce, having given her powers back to Karone. The reasons for this are unknown though a possible reason is because Kendrix thought Karone was a better Pink Galaxy Ranger than she is.

She was shown along with the other Galaxy Rangers when the villains were looking for a past villain to revive with the Reanimizer, and came across Psycho Red.

Kendrix, as the Pink Galaxy Ranger, is a playable character in Power Rangers Legacy Wars,she is a Common (Leader), Common (Assist) character, and represents Galaxy Rangers alongside Michael Corbett.

Kendrix's death was in The Power of Pink. At the end of the previous episode, only Psycho Pink managed to survive from the battle while the other Psycho Rangers didn't; she was then rejuvenated by Deviot. During the battle with Psycho Pink on Rashon, Cassie was defeated and demorphed which caused her to drop her Astro Morpher. Psycho Pink saw this to her advantage and stabbed Cassie's morpher with the Savage Sword, creating a deadly pink energy storm, putting Terra Venture and Cassie in danger.

Kendrix first reappeared in the following episode when she informed Maya in a dream that her Quasar Saber landed in the wrong hands. The Saber was then stolen by Karone, posing as her former identity. When Karone was later thrown off a cliff by Trakeena, Kendrix's spirit appeared, saving Karone and transferred her powers to her, allowing her to become the second Pink Galaxy Ranger. From then on up to the 3-part finale, Kendrix remains absent but maintains her position as part of the main cast.

Kendrix's resurrection was seen at the end of the 3-part finale. When the Rangers returned to Mirinoi, they placed the Quasar Saber back in the stone as before. Magic sparks came from the Quasar Sabers, demorphing the Rangers and restoring Mirinoi back to its former glory. Not only were the inhabitants of Miniroi freed from Furio's stoning spell but Kendrix was also restored. Kendrix told the other Rangers that "I knew you'd make it here" and thanked Karone for filling in for her absence. The Rangers celebrated their victory with fireworks along with the Galactabeasts.

Kendrix returned to Earth to join her teammates and the Lightspeed Rangers against a resurrected Trakeena. She fought alongside her Pink Ranger successor. After defeating Trakeena, Kendrix and her teammates say their goodbyes to the new Rangers and then return to Mirinoi.

Years later, Kendrix gave Karone her Morpher and Quasar Saber once again so that she could assist her team and defend Harwood County from the invasion of the Armada on Earth. It can be assumed she stayed to defend Mirinoi while her team was absent.

Highly intelligent and analytical by nature, Kendrix is interested in all things scientific. She always has a logical explanation for everything, which sometimes prevents her from seeing the wonder around her. Her blossoming friendship with free-spirited Leo teaches her to have a more fun-loving and spontaneous side. She is also one of the most loyal, caring, brave, and strong characters seen in the franchise. She is always worried for her friends and protects them; when Cassie Chan was about to lose her Morpher, she didn't hesitate and gave her own life to destroy Psycho Pink, and as a spirit, she looked for the right person to now transfer her powers and proved herself to be wise once again by choosing the newly reformed Karone to fill in her shoes. 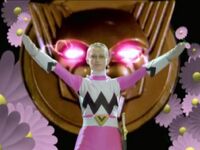 The Galaxy Pink Ranger Key is Kendrix's personal Ranger Key. This key along with the majority of the Core Ranger Keys are seen lining the Command Center's interior walls. This key is mainly used by Emma Goodall (Super Megaforce Pink) who uses it to fight as the Pink Lost Galaxy Ranger.