Kazu of the Heavenly Time Star

Kazu of the Heavenly Time Star ("天時星" 知, "Tenjisei" Kazu) is KirinRanger (キリンレンジャー, Kirin Renjā, Qilin Ranger) of the Dairangers. A stylish hairdresser and dancer who ran away from home at age 15 (38 in Gokaiger) and came to Tokyo.

Kazu Tenjisei was 19 when he became a Dairanger. A confident striking hair-salon stylist always impeccably dressed, groomed, moving, the supposedly cool city boy was actually a country boy. He ran away from his native town when he was fifteen years old. A little old lady selling ramen from her street-stall noted this fragile boy staring longingly and very lost nearby and took pity on him. If it hadn't been for her he would probably have returned home. But Kazu turned himself into a cultured city-boy. He was a great dancer, as he had mastered the Drunken Fist fighting style and odd though as it may seem, he had a tendency to go rushing into battle when perhaps he should have thought it through.

In episode 12, he faced the Immortal Tofu in a drinking contest. But his teammates had made certain that his drink was clean. In episode 25, his photograph was taken by the Copy Empress Gorma, who then produced his evil twin. However good the copy was, it was still flawed and when it faced the real Kazu alone, it was destroyed. During episodes 28-31, he became friends with Kameo, who was the only person to learn Kazu's secret of being a country boy. The two became fast friends and in episode 31, when the secret even Kameo didn't know about himself was discovered, Kazu was captured and tormented, nearly to death by a powerful set of evil Gorma. Fortunately, He was saved by Kameo, who accepted his identity as Daimugen. He was always there for his group. It was Kameo who encouraged Kazu to fight.

Two clones of KirinRanger were created by Copy Empress. The first, created while Kazu was alongside the other Dairanger during a day at the pool, was part of a plot to assassinate Master Kaku by infiltrating the team. This clone abducted Kazu, joined the team and got away with infiltration, but was noticed by Kaku in not fully grasping Kazu's Qilin-style martial arts. Later, after Kazu freed himself from grasp, he was forced into a showdown with the fake Kazu which he loses prior to Kaku taking down the fake. Unlike the others, this first fake Kazu never transformed into KirinRanger.

Later, Kazu, alongside his team, joined forces with the Fivemen, Jetmen, Zyurangers, and Kakurangers to defeat the evil Emperor Daidas and his forces.

KirinRanger is among the Sentai warriors seen in clips when Daimon Tatsumi (GoYellow) lectured Kai Samezu (GaoBlue) about the past Sentai technical warriors and their fighting spirit.

Years later, Kazu fought alongside not only his own team, but every single Sentai Ranger in existence, against the Empire of Zangyack when it attacked the Earth in the Great Legend War. After fighting against hundreds of Gormin and their Zgormin commanders. Kaijou noticed the fleet moving towards them, he gathered all the Rangers together and gave them the order to sacrifice their powers to wipe out the first invasion's armada. The Kirin Ranger powers are later utilized by Luka Millfy via the Ranger Keys and also by Gai Ikari on one occasion.

In Nobuo Akagi/AkibaRed's roll call in the third episode of the first season of Hikonin Sentai Akibaranger, he says "Use the KirinRanger's drunken-style!"

Kazu, alongside his team (bar KibaRanger), among the majority of the Super Sentai heroes, was caught up in the "Super Hero Taisen" incident which eventually resulted in the Super Sentai teams and Kamen Riders joining forces to defeat both Dai-Zangyack and Dai-Shocker.

KirinRanger appeared with his team among the first 38 Super Sentai whom collectively empowered Wild Tousai Shuriken King in its fight against the titanic Gillmarda, granting the Ninningers and Zyuohgers the power to perform the Zyuoh Ninnin Super Sentai Burst which destroyed Gillmarda with the combined power of all 40 Super Sentai.

, competing for the title of Kamen Sentai Gorider, with KirinRanger as candidate for Kirider. However, the Dairangers were beaten in the first round by Team Ex-Aid

As KirinRanger, Kazu uses a variation of Drunken Fist called Kirin-Fist which enables him to manipulate time, slowing it down to analyze an opponents attack, or even reversing it to avoid taking damage if he makes a mistake in battle. He can also channel his Kiryoku into his fist, enlarging them in order to increase the force of his punches. 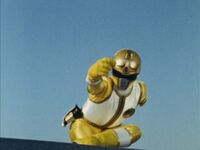 In the original concept of Dairanger titled Chuuka Sentai Chinaman, KirinRanger is present as one of the five Dairangers, with minor costume differences.

The KirinRanger Ranger Key (キリンレンジャーレンジャーキー, Kirin Renjā Renjā Kī) is Kazu's personal Ranger Key and what became of his powers after he along with the rest of the 34 Super Sentai sacrificed their powers to end the Great Legend War.

This key along with the majority of the Ranger Keys were collected by the Red Pirates and later used by the Gokaigers. The KirinRanger Ranger Key was mainly used by Luka Millfy (Gokai Yellow), who used it to fight as KirinRanger. It was also used by Gai Ikari on one occasion.

The Dairanger keys, along with all the Ranger Keys of the first 33 Super Sentai, were briefly taken by the Black Cross King and turned into Ranger puppets that were fought by the Gokaigers and the Goseigers. Splitting up, the puppet KirinRanger was defeated as part of a group of surviving Yellow warrior keys by Gokai Yellow and Super Gosei Yellow.

After Zangyack were finally defeated, the Gokaigers gave the Ranger Keys back to their rightful owners. Kazu received his key back, allowing him to become KirinRanger once more.

A female version of KirinRanger as seen in Gokaiger.

Kazu of the Heavenly Time Star/KirinRanger: to be added

KirinRanger is among the vast pantheon of Rangers which are available in the mobile game Super Sentai Battle Base.

KirinRanger appears with his team among all Sentai in the mobile game Super Sentai Legend Wars.