Either White or Orange

Dr. Kat Manx is an ally from Power Rangers S.P.D. She is an alien with cat-like features in charge of all research and design for Ranger technology at S.P.D.'s Earth Delta Base. She was also temporarily the S.P.D. Kat Ranger. Aside from intelligence Kat is shown to have fighting potential and to be able to hold her own for a while. Despite her youthful appearance, she is 147 human years old. This may be an inverse of how cats age 7 years for every human year which would physiologically put her at about 21 years old, or perhaps, since she is an alien, a year on her home planet is seven times the length of a year on Earth.

Kat is the Rangers' technical support. She has designed most of the Rangers' weapons and is Anubis Cruger's trusted assistant and friend. Her home planet was also attacked by the Troobian Empire so she joined S.P.D.'s fight against evil. Kat has also been shown to have great fighting skills. During a battle with Krybots she was able to morph once and become the Kat Ranger. However, this was only temporary and those Ranger powers were never seen again.

When Kat was young she attended the Science Academy alongside Professor Mooney where she frequently found herself above him in terms of social and educational status much to his chagrin; this left Mooney with a strong dislike for her and a bitter desire to prove himself which eventually drove him mad.

In 2001 Kat worked with the parents of the B-Squad Rangers in developing the morphing technology used in the S.P.D. morphers. However, these experiments had side-effects that while not affecting Kat (likely due to her different physiology and biology) did affect the B-Squad's parents and thus their children–who would become the B-Squad–got their civilian powers.

Later on in the season she is recruited to S.P.D. Central Command as requested by Fowler Birdie. She returns to Earth with a temporary morpher and becomes the S.P.D. Kat Ranger to stop an adult Mooney. Although her time as a Ranger is limited (her morpher has only enough for one hour according to Birdie; whether she used it all up or simply used some of it is unknown) she realizes the Rangers need her on Earth.

Before the final battle she and Boom are captured by Broodwing who turns the Delta Base into its Megazord configuration. Thanks to R.I.C. the two escape and shut the Megazord down allowing B-Squad to defeat and capture Broodwing. During the final battle against the invading Troobians she, Boom and Sam led the S.P.D. cadets in the battle to protect Delta Base. Together they held off the forces long enough for reinforcements led by Birdie and Sergeant Silverback to arrive as well as Nova Ranger allowing them to defeat the enemy. During the fight against Omni The Magnificence she analyzes the enemy and finds its weak spot and gives the information to Cruger and the Rangers who use it to destroy Omni even though she knows it may cost Cruger his life. Kat is relieved to see that Cruger and his wife survived and watches the final fight between Emperor Gruumm and Cruger that results in Gruumm's capture. Afterwards Kat remained at S.P.D. Earth Station.

Kat was not shown to have fought in the battle between the Legendary Rangers and the Armada. Given her Sentai counterpart fought in the Legend War, it is entirely possible that she did indeed fight elsewhere.

During the attack of Drakkon in the year 2050 Kat Manx and Boom, who are locked in the command center, tell Doggie that there’s a modified version of the R.I.C. that is stuck in a hangar that lost power.

Kat as Kat Ranger among other Rangers and villains are briefly in a fragment of the reality when the Emissaries Three observes all the Ranger realities.

Kat Ranger is among the Rangers who feature in Power Rangers Legacy Wars, she is an Epic (Leader), Epic (Assist) character, and represents the S.P.D. Rangers alongside Sam, Anubis Cruger and Sky Tate.

Kat Ranger is a playable character in Power Rangers: Battle for the Grid, she uses her Cat Stunners primarily as her weapon.

Kat Manx is intellectual, headstrong and resourceful lady with a calm and intuitive persona. She is naturally authoritative and willing to take the lead when necessary, and has a professional mentor-like relationship with the Rangers and Boom. Despite her analytical attitude she displays strong empathy; for example she listens to and advises B-Squad and is mostly understanding of their difficulties (for example when she acknowledges she's surprised B-Squad talks at all due to tight quarters) only losing her temper a handful of times. She also often counsels Cruger. In terms of the Rangers this could be argued to be a somewhat parental role from time to time and she is certainly greatly cared for by B-Squad. That said, she is clearly able to establish firm professional boundaries - often opting to take a professional attitude with Cruger when in front of other staff members. She also does not divulge much about her own feelings and personal life. For the most part she is able to put her own feelings aside to benefit SPD. She is intuitive and discerning, and uses this judgement to know when it may be appropriate or necessary to cross the line (e.g when she confides in B-Squad that Cruger told them they were "the best he's ever had", pushing Cruger to be the Shadow Ranger and knowing Bridge is lying when he says Grumm did not say anything further. She is occasionally playful and lets out strong emotions: her anger at Cruger and breakdown in the final battle being two big examples - as well as being known to crack a big smile out of relief or pride. She seems to consider this as a weakness though which may explain her hatred of goodbyes. Kat is shy in the face of praise and not exempt from making mistakes - on one occasion she trusted Piggy to provide safe hardware out of desperation.

This form is exclusive to S.P.D. Episode 29. 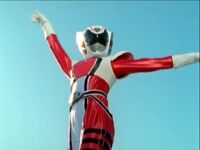