RangerWiki
Register
Don't have an account?
Sign In
Advertisement
in: In Space, PR Villains, Lost Galaxy,
and 22 more
English

< Karone
View source
watch 01:55
Cobra Kai Season 4 - The Loop
Do you like this video?
Play Sound

From Out of Nowhere

Astronema is the primary antagonist in Power Rangers In Space. She is known throughout the universe as the Princess of Evil, Dark Princess of Space, and the Princess of Darkness. Her name may be a pun of "astronomy" and the Space Constellation, Andromeda. She is the figurehead of the United Alliance of Evil, second only to Dark Specter.

However, she was unable to realize her dream when she was kidnapped as a child by the evil bounty hunter, Darkonda. Darkonda took her to be raised by Ecliptor to be evil, and she was named K-60102, also called by Kay, who was brought up to be the heir to the throne of Dark Specter.

After being kidnapped by Darkonda from her home planet, Karone became the new apprentice of Ecliptor by order of Dark Specter. She is one of the selected children by trusted generals, hand-picked and molded into warriors capable of competing for the honor of being heir to Dark Specter's empire. After a few years, she attacked most of the Prism Rangers, but only managed to get the Pink Ranger of that team as the others escaped (later lying to Ecliptor by saying that she killed the all). Astronema tried to get Zordon's location from the Pink Ranger, but when she refused, Astronema killed her by crushing her spine. Kay then had to fight her adoptive sister Dee for the heir, she eventually bested Dee and proceeded to face her inner conflict. After much struggling, Kay received her heir, and Dark Specter called her "Astronemma".

Astronema went to the bar to attack the Red, and Black Omega Rangers. She continued fighting them until the SPD arrived to arrest them. Astronema and Zack shared a cell, where she attacked the latter until the SPD cadets activated barriers between them. Zack then tried to reason with Astronema when she mentioned that the Power Rangers "killed" her family. [1]

Prior to the events of the series

Once known as Karone, sister of Andros, the Red Space Ranger, she lived on the planet KO-35, a human space colony. While playing with her brother, in the park, they were developing telekinesis as they played with a toy sphere. When the sphere floated away, Andros went after it, and Karone was captured by the vile Darkonda. Screaming for help, she was transported to another planet, and met Ecliptor and Dark Specter, the Grand Monarch of Evil.

She was left in the care of Ecliptor who became a fatherly figure to her and trained her to be an evil warrior. The memories of being Karone faded away. Ecliptor had told her lies of the Power Rangers destroying her parents and her brother. After years of training and competing against other evil warriors, Astronema was later trained in the dark arts of magic. She was awarded the Wrath Staff, which she uses to manipulate others and battle her opponents. With Dark Specter's help, she gained the space station, Dark Fortress, and an army of robotic soldiers called Quantrons. Astronema is known to change her hairstyle and color at will. Also, Astronema is the first and only villain to attempt attacking a Megazord while it transformed, even though this did not work. She wore her locket that had the same pictures of her and Andros as children, however, she refused to acknowledge that she and Andros were siblings until later. As Astronema roamed the universe, conquering and destroying all those who would not serve her or Dark Specter, she would destroy them or turn them into his slaves. She met a warrior that carried the Armor Keys, magical talismans that would grant him great armor. To prevent the warrior from using the keys, she turned him into a stone figure.

We first saw Astronema on the Cimmerian Planet conference. When she sat down at the main villain table, she was suspicious of a cloaked figure (Andros in disguise) and was the one to reveal what he was after Divatox became suspicious of him and this was completely revealed once Goldar tore the cloak off of him. Once he escaped, having destroyed two of her Quantrons in Velocifighters, Dark Spectre announced her the Princess of Evil and sent her to kill her brother.

Astronema had found herself in love with the Silver Ranger, Zhane (A Date with Danger). However, due to one anothers "lies", their relationship ended badly.

When she found out who she truly was, she had sided with her brother, Andros, and helped him find Zordon. She was later captured by Ecliptor, who was brainwashed, and was condemned to the same fate as he. Her emotions were removed and was inflicted with cybernetic implants that controlled her (many fans call this version of her "Circuit Astronema" or "Locutus Astronema"). During this time, Astronema created the Psycho Rangers, extremely powerful, homicidal counterparts to the Power Rangers whose job it was to destroy the Rangers and also drain energy from Dark Specter.

After Dark Specter's demise at the hands of Darkonda, Astronema usurped his throne and became the Queen of Evil. She was transformed back into Karone during "Countdown to Destruction", when she and her brother battled until a deflected energy bolt struck her, knocking her out or possibly killing her. Once the battle was over, Andros carried her body down the ramp of the Dark Fortress, laid her on the ground, and began crying. A few tears hit her cheek and she was restored to her true self. Only the love Andros felt for his sister was strong enough to bring her back.

A year or so later, when the Pink Galaxy Ranger's Quasar Saber fell into the hands of evil on the planet Onyx, Karone once again donned the disguise of Astronema. She threatened to destroy everyone if she didn't get the Saber. The auctioneer quickly handed the saber to her and she was almost home free until Trakeena showed up and revealed her. Later, when Karone and Leo went to search out a power strong enough to defeat Trakeena's latest monster, Karone has to face her inner conflicts in the form of Astronema. After proving she was strong, Astronema disappeared, leaving only Karone.

Astronema featured in a chronicle of Power Ranger history compiled by Tommy Oliver shortly after he formed the Dino Rangers, which was found by the nascent Ranger team in the Dino Lab.

Five years later, Astronema's gauntlet is one of the many villain relics in Ryjack's collection that are acquired by Evox and his minions. Evox plans to revive and gather the most notorious villains in the universe with Ryjack's reanimizer after reviving Sledge's Crew and Snide. She had been mentioned among the villains: Koragg, Lord Zedd, and Psycho Red, who could be resurrected by Evox, before Goldar is decided as the last resurrected villain. Astronema was Robo-Roxy's choice, but Robo-Blaze learn from that Astronema, turned good (as Karone), already been purified by Zordon's sacrificial energy wave, and fully reformed as the second Galaxy Pink Ranger long ago, much to Robo-Roxy's disgust.

Astronema is among the villains who feature in Power Rangers Legacy Wars,she is a Rare (Leader), Rare (Assist) character. 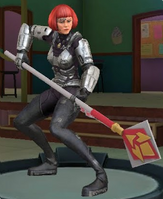 Astronema's persona had varied throughout the entire series. In the beginning, she was very vain and narcissistic (much like Rita Repulsa and Divatox before her) in her own character and towards others, her minions and enemies alike, with somewhat of a childish persona. When she was tasked by Dark Specter to defeat the Rangers, her very demeanor became more serious and stern due to perhaps constant failure to destroy the Rangers and added pressure by Dark Specter himself, who threatened to destroy Astronema along with the Dark Fortress should her failures reach it's peak, namely if the Rangers should rescue Zordon from Dark Specter himself. Though maybe due to the echoes of her past of her long-forgotten childhood as Karone, Astronema has displayed emotions of caring and compassion, when she briefly fell in love with Zhane, after the latter had rescued her from one of her own rebellious monsters. These same emotions also allowed her to instinctively attack one of her own Quantron warriors, which attacked a mother with her two children while defended by Andros. This may be as a result of guilt towards her own actions, and due to her secret longing for her brother whom she suspected that may be alive. After discovering that Andros is her long lost brother, Astronema didn't believe him at first. However, Astronema went to her home planet for answers about her past as she realized that Andros was telling her the truth. Also, after discovering her past, Astronema went through an identity crisis as she became conflicted between good and evil. Despite Dark Specter's plan to test her loyalty and orders to destroy her brother, Astronema's curiosity about her past got her to go to Andros for answers about herself as Karone and their family. However, seeing Andros and the rest of the Rangers in trouble because of her part in Dark Specter's plan, Astronema embraced her real self as Karone and rescued them.

After Karone was captured and reprogrammed by the sadistic alien Darkonda, Dark Specter, and even Ecliptor, who was also reprogrammed by Darkonda, the emotions that made her good were overwritten by a seemingly impenetrable computer programming that allowed her to know only evil. In this manner, she became much darker and more evil than her first incarnation as Astronema. Her demeanor was altered significantly, displaying no emotions of compassion, caring, and guilt, and even her feelings of anger and frustration were almost limited, and even lost her vanity, as she no longer wore makeup nor changed her hairstyle. She was, however, more power-hungry as not only was she capable of destroying the Rangers, but even with full knowledge that Andros was her brother, Astronema would still destroy him at any given moment. She was even capable of destroying Dark Specter, paving the way for Universal conquest, something she would perhaps never consider doing on her somewhat own will, and had nearly succeeded with the use of the Psycho Rangers who used and severely drained Dark Specter of his energies in the process of defeating the Rangers. Her tactics against the Rangers were more brutal yet effective when she unleashed the Psycho Rangers against the Power Rangers as well as strategically taking out the Rangers Zords, namely the Delta Megazord by an empowered Ecliptor and the Mega Voyager, which was destroyed by her most powerful monster Tankenstein. Although she could not overall resist her programming, Zordon attempted to convince Astronema that she was Karone and that she was not truly evil. For a brief moment, this caused a glitch in her programming, however, it was not enough to bring Karone back to her true self at that moment, and Astronema would declare herself as the Queen of all Evil.

This form is exclusive to In Space Episode 19

Astronema is almost always seen wearing a black and white skin-tight leather suit that covers her whole body, a pair of high heel boots and a pair of metallic rectangular arm guards with blades on each one. She wears a necklace that has a picture of her and her brother Andros almost all the time. The only changes in appearance that Astronema has is her hair. Astronema changes her wig every 2 or 3 days depending on her mood. When she enters battle, she dons a grey-colored piece of armor that covers her chest and grey shoulder plates as well. After being brainwashed by Dark Specter, Astronema's hair became short and red and she wears a metallic breastplate, along with cybernetic parts attached to the right side of her face that ensure she remains evil.