Scroll 46: The New Year's Meal and The Three Giants

Piloted by Spear Six, Satarakura, modeled after Gliding Ninja Musasabistal. Originally meant to be piloted by Sargain, but he was destroyed before he could operate his final creation, so Satarakura was forced to pilot it. Its special attacks are "Calbee Dive" and "Mosquito Ruby Punch". In battle it can also release a crystal laser from its three eyes with a radius/10 kilometer range. Destroyed by Tenkuu Gouraijin. 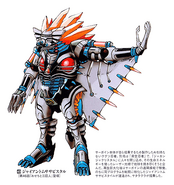