"This bag...You must take it!"
―Yokai Kappa's first words (whilst in his human form) when handing Sasuke the bag containing cucumbers which he disguised as money.[src]

"I'm gonna step on you!"
―Kappa when he enlarged himself.[src]

Kappa (カッパ, Kappa 1, 2, 12 & 53) is a Youkai who assumed the form of a Bespectacled Man (眼鏡の男, Megane no Otoko) in pilot attire and is a master of Cucumber Bomb and Phantom Space Ninpo.

One of the few Yokai not to have been sealed, Kappa tricked Sasuke and Saizou into breaking the Seal Door so the Yokai can return to power. He is personally responsible for Sasuke unlocking the Seal Door and letting loose the Yokai, beginning the events of the season. Though he escaped Muteki Shogun, Ep. 1: It's Ninja Kappa's attempt to kill the Kakurangers for making his wife Rokurokubi cry ends with him killed when sliced down the middle by Red Saruder's Saruder Slicer with his explosion killing his wife as well. Ep. 2: A Dangerous Lady

A replica of Kappa was later created to aid Tengu with a large, curved, silver arm blade in place of his right arm and had metal boots on his feet. He faded once Tengu was killed. Ep. 12: They Came Foorth!! New Juushou

Kappa reappeared, along with all the other defeated Yokai, within the Seal Door after their master Daimaou was finally contained there by the Kakurangers. Reeling that they were now powerless in captivity, the Yokai all vowed that they would one day be reborn and regain their power, cursing humanity. Final Ep.: Sealing!!

Kappa is manical, emotional, and manipulative, and is utterly ruthless in combat. However, he does genuinely love and care for the well being of his wife Rokurokubi.

Human Disguise
Kappa can disguise himself as a human, either a bespectacled man or a woman.
Ninpo
Like most Yokai, Kappa had been lived since the Sengoku Era. Due to this, he had mastered several Ninja Techniques. Among them are:

Size Change
Kappa can turn himself into gigantic proportions that matched the height of Red Saruder. 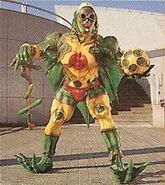 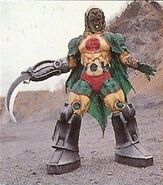 Kappa replica
Add a photo to this gallery

Retrieved from "https://powerrangers.fandom.com/wiki/Kappa_(Kakuranger)?oldid=937610"
Community content is available under CC-BY-SA unless otherwise noted.