Act 44: The Eighteenth Head of the Shiba House

"This brings a chapter to an end!"
―Shinken Red after a victory in battle[src]
"I'm here! I am the 18th Shiba clan head. Shiba Kaoru. Chimatsuri Doukoku. Today, you will be sealed!"
―Kaoru Shiba challenge Doukoku Chimatsuri[src]

Kaoru Shiba (志葉 薫, Shiba Kaoru) is the true 18th head of the Shiba House, a position that Takeru was holding in her place. To distinguish her ranger designation from Takeru, she is referred to by her vassals and servants as Princess Shinken Red (姫シンケンレッド, Hime Shinken Reddo).

As the 17-year-old head of the Shiba House, Kaoru is the one who possesses the knowledge of sealing the Gedoushu. Due to this, she stayed in hiding while Takeru acted as her kagemusha to keep the Gedoshu away from her. However, refusing to hide, and perfecting the sealing character, Kaoru takes back her title and assumes her birthright.

Even though it could be hinted that her appearance would open up a ridge between Takeru and the other Shinkengers (especially seen as how Takeru's childhood friend Genta appeared to dislike her at first), they stood loyal neither to the Shinken Red figure, nor to the figure of the head of the Shiba house, but to Takeru as a person, which Kaoru understood and accepted, eventually adopting him to make him her legitimate successor as the head of the Shiba clan. (i.e. She became his adoptive mother even though she is younger than him)

Like Takeru, Kaoru has the ability to become Shinken Red and can use the Inromaru to transform into Super Shinken Red.

Although she was disliked by Genta at first for the reason that she had usurped Takeru as head of the Shiba Clan, she soon showed that she was very kind and caring, which won him and the other Shinkengers over. However, like Takeru, Kaoru tends to holds her emotions back. Oftentimes her retainer Toshizo Tanba annoys her, as he usually sticks to his arrogant views thus essentially acting as a foil to her. Whenever it happens, she responds by hitting him on the head with a fan to show her displeasure.

Kaoru attempted to seal Doukoku away with the sealing character she had spent her lifetime learning, however it failed due to his absorbing Dayuu. As a result, she was badly injured and resigned as the 18th head, adopting Takeru as her son and officially making him the 19th head of the Shiba Clan. At the end of the season she is seen saying goodbye to Takeru. Following this, Tanba suggested she get married but she then sternly says, "Too soon".

After Takeru was brainwashed by Buredoran of Chimatsuri into serving the Gedoshu, Kaoru reappeared in order to help. After telling Ryunosuke that Alata's statement that believing that everything would work out was a sentiment that would give him strength in battle, she took Alata with her. She then infused a Gosei card with Shiba fire power, creating the Fire Tornado card and told Alata that if he combined the power of her Mojikara with his Tensou techniques, he may be able to save Takeru. With these words in mind, Alata was able to break the spell that Buredoran had over Takeru and returned him to normal.

Kaoru fought in the Great Legend War, along with the first 34 Super Sentai teams. She, along with everyone else, sacrificed their powers to destroy the Zangyack armada.

TV STORY-Gokaiger Goseiger Super Sentai 199 Hero Great Battle Kaoru's Ranger Key, along with those of the 9 other Extra Heroes, ended up in the hands of Basco ta Jolokia.

When the Gokaigers appear searching for a samurai, she challenges them to retrieve the Shinkenger Ranger Keys, and Joe Gibken challenges her to allow the other Gokaigers to fight the Zangyack forces. When she realizes that the Gokaigers fight for good, she uses her kuroko to help them when Captain Marvelous is critically injured in battle.

After the Gokaigers defeated the Zangyack Emperor, she got her powers back as did her team.

When Yoko Usami and Beet J. Stag were sent back in time to the Edo era by the surviving Zangyack forces and met up with Gai Ikari, the three devised a plan to inform Yoko's teammates of the time period they were in by writing a letter and arranging it to be delivered at the correct time. Handing the letter to the Shiba household, it was passed down the line until the time came to hand it to the Energy Management Center. When this time came, Kaoru, as the former head of the Shiba house, delivered it personally.

This key, along with the other nine extra hero keys and the fifteen sixth ranger keys, were initally acquired by Basco ta Jolokia and later used by the Gokaigers. Like all of his Ranger Keys, Basco used his trumpet, the Rapparatta, to turn the Princess Shinken Red key into a puppet to do his bidding. Basco united his nine remaining Ranger Keys when he was confronted by Goro Hoshino (OhRed). The Extra Heroes would then fight the Gokaigers again, who wished to take the Ohrangers' greater power rather than just be given it. Princess Shinken Red fought Luka Millfy (Gokai Yellow), who fought as OhYellow. The Princess Shinken Red key, along with the rest of the Extra Heroes was claimed by the Gokaigers.

While in the possession of the Gokaigers, the Princess Shinken Red Ranger Key was used once by Ahim de Famille (Gokai Pink) and twice by Luka Millfy (Gokai Yellow).

After Zangyack were finally defeated, the Gokaigers gave the Ranger Keys back to their rightful owners. It is presumed that Kaoru received her key and became Princess Shinken Red once more. 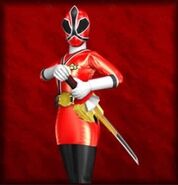 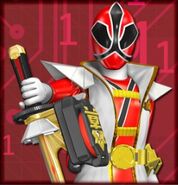 Princess Shinken Red is among the vast pantheon of Rangers which are available in the mobile game Super Sentai Battle Base, with her Super Shinkenger form being available as well.