The Kanaema Stones (カナエマストーン, Kanaema Sutōn, lit. "Wish-Granter Stones") are mysterious jewels resembling Magatama, and only four of them exist in the universe. Each stone can grant a specific kind of wish, but all of them combined can grant any wish with no limitation. However, if the powers have been used up, they turn black, though they will shine again after some time has passed.

Takamichi Crystalia was originally trying to collect these to save his sister, Mabushina, from the Yodonheim curse that killed her mother, Queen Mabayuine, but now that Mabushina was cured by Mashin Zabyun, he continues searching for them in the hopes to rebuild Crystalia. 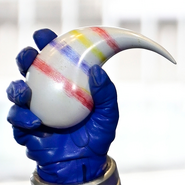 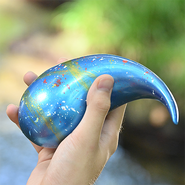 Energia
Add a photo to this gallery

Retrieved from "https://powerrangers.fandom.com/wiki/Kanaema_Stones?oldid=952124"
Community content is available under CC-BY-SA unless otherwise noted.