Kamen Rider has several shoutouts and references to Super Sentai as well as a crossover.

The Hyper Battle Video Kamen Rider Ryuki: Ryuki vs Kamen Rider Agito, sees Shinji Kido having a dream where, as Kamen Rider Ryuki, he joins up with Kamen Riders Knight, Zolda, and Ouja. They then team up with Agito. The riders act out of character in the dream, more like a Super Sentai team.

The Abaranger movie, Bakuryuu Sentai Abaranger: Abare Summer is Freezing!, included a reference to the Kamen Rider movie it was double-billed with, Kamen Rider 555: Paradise Lost (mostly as a breaking the fourth-wall joke), where Disciple of Dawn Lije tells Visionary Messenger Voffa there isn't enough time to use his Giganoid with the movie over.

Episodes of Kamen Rider Decade on July 12 and July 19, 2009, as well as Act 21 of Samurai Sentai Shinkenger, featured a crossover between the two series.

Kaizoku Sentai Gokaiger and Kamen Rider Decade are similar in that both feature warriors changing into those of the past, they are both anniversey seasons, and both feature one of their movies being a big gathering of all heroes of their respective shows.

A crossover movie between Super Sentai and Kamen Rider has been announced, Kamen Rider vs. Super Sentai: Super Hero Taisen. The movie will feature Gokaiger and Decade as the lead, with Go-Busters and Fourze having a more minor role.

Aside from on-screen crossovers, Kamen Riders and Super Sentai have joined forces numerous times in stage shows over the years.

Actors who have appeared in both franchises

When Saban acquired the rights to create an adaptation of Kamen Rider similar to Power Rangers, they created "Masked Rider". Masked Rider was introduced in a three-part episode of Power RangersA Friend in Need that paved the way for Masked Rider. In 1996, Marvel Comics published a one-shot issue of Masked Rider, which was the last time the character teamed up with the Power Rangers.

In 2009, another American Kamen Rider adaptation was broadcast, Kamen Rider Dragon Knight. However, this adaptation had no connection with Power Rangers, being conducted by Adness Entertainment.

Saban had registered a trademark for "Power Rider" in 2011, which had led some fans to believe that a new Kamen Rider adaptation is coming. However, by Jan 2014, without any further news of development from any team under Saban's developments, the trademark expired, with the project likely abandoned long before the expiration date. 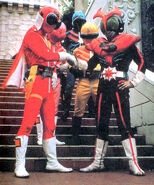 The Gorengers with Kamen Rider Stronger 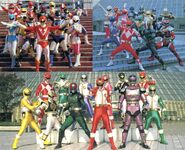 The ToQgers with Kamen Riders Gaim, Ryugen, and Baron
Add a photo to this gallery

The Kyoryugers with Kamen Riders Wizard and Beast

The core ToQgers with Armored Riders Gaim, Baron, and Ryugen, with New Generation Riders Zangetsu-Shin, Duke, Marika, and Sigurd.
Add a photo to this gallery

Retrieved from "https://powerrangers.fandom.com/wiki/Kamen_Rider?oldid=958814"
Community content is available under CC-BY-SA unless otherwise noted.