Kamaitachi (カマイタチ, Kamaitachi, 35) is a weasel Yokai who could supposedly move at such a tremendous speed, it could create the illusion of duplicates/three of itself.

After being beat down by the Punishment Sailor Sisters, Kamaitachi was destroyed single handedly by Tsuruhime. Ep. 35: The Three Punishment Sisters

Though unseen, Kamaitachi's spirit presumably emerged within the Seal Door along with all the other defeated Yokai, after their master Daimaou was finally contained there by the Kakurangers. Reeling that they were now powerless in captivity, the Yokai all vowed that they would one day be reborn and regain their power, cursing humanity. Final Ep.: Sealing!! 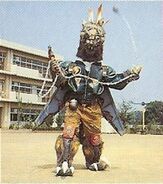 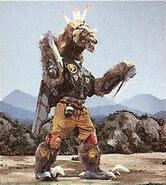 Enlarged Kamaitachi
Add a photo to this gallery

Retrieved from "https://powerrangers.fandom.com/wiki/Kamaitachi_(Kakuranger)?oldid=943220"
Community content is available under CC-BY-SA unless otherwise noted.