Retroactively, he is also referred to as Turbo Blue Ranger - a variation on his in-show label.

"Young Justin, you will continue on as the Blue Ranger."
―Dimitria retaining Justin's Blue Ranger powers[src]

Justin is the youngest human Power Ranger yet (not counting Rangers who for a time weren't human, such as Mack Hartford and Steel). His enthusiasm and energy helped him adapt to his responsibilities as a Turbo Ranger. Justin is a child prodigy with an intellect far past his peers. This gift has led to Justin being skipped ahead to 9th grade at Angel Grove High School, where coincidentally, his fellow Ranger Kat was teaching the incoming Freshmen. Justin's mother passed away several years ago, leaving Justin alone with his father Doug, who was a businessman and was always on business trips and ran a martial arts school, but later closed it down, making Justin the first Power Ranger to have lost one of their parents, followed by Dana and Ryan Mitchell, Cam Watanabe, Emma Goodall, Preston Tien, and Brody Romero and Levi Weston (their mothers), and Sky Tate, and Lauren & Jayden Shiba (their fathers).

Justin discovered the identities of the Power Rangers by accident when he was visiting Rocky in the hospital when Rocky was recovering from a back injury, during a fighting practice and hid under Rocky's hospital bed when he heard the other Rangers come into the room, and saw them answer a call from Zordon on their communicators, and then saw them teleport back to the Power Chamber. With Rocky in the hospital, the Power Rangers were short a member when they needed to be at full strength in order to fight Divatox. Rocky chose Justin to be his replacement during the crisis and to become the Blue Turbo Ranger. The others were at first baffled that a pre-teen was on their team, but they got used to him.

After Rocky recovered, he left the powers with Justin and chose to retire from a life as a Power Ranger after declaring that his powers are now in good hands since he had a lot of stuff to do in his new karate school. When being bullied by two punks, Justin was anxious to use his Ranger strength against them but chose not to, as the Ranger code states that he cannot use his powers for personal gain.

Justin received super strength from an ant bite (when it was exposed to mutagenic chemicals), however, it did not allow Justin to access his Ranger powers. Although he liked the respect from others he gained from the strength, he gave it up to continue being a Ranger.

Justin's father returned to Angel Grove and started living with his son. The two were happy to be together again, however, Doug was offered a great new job that would mean he and Justin would have to move away. Doug however was not willing to move away if Justin wanted to stay in Angel Grove. Justin, knowing how much his dad wanted the job, told him not to make the decision right away. Shortly afterward, the Power Chamber was destroyed by Divatox's forces and Justin lost his powers along with the other Rangers. Desperate to pursue Divatox into space, Justin snuck into NASADA and told General Norquist that the Power Rangers needed the space shuttle. As the Rangers prepared to leave, Justin made the decision to stay behind with his dad. The other Rangers understood and they bid each other a brief but heartfelt goodbye. Following this, Justin told his dad to take the job and the two moved away from Angel Grove.

Although Justin had returned to a normal life, his father was very busy with work and frequently had to leave Justin alone. One night, Justin was found by Storm Blaster, who snuck him out, and took him to save the Space Rangers from Astronema's army and rescue Lightning Cruiser. Storm Blaster revealed he still had Justin's old Morpher, and he somehow had access to his Blue Turbo Ranger powers once more. He was reunited with the other Rangers and helped them save Lightning Cruiser. He also met Andros for the first time. He got back in time just before his father returned that morning, and although he had a mountain of work - upon seeing a neighbor father spend time with his son - Justin's father decided to take him fishing instead and presumably decided to cut back on his work to spend more time with his son.

TV STORY-True Blue to the Rescue

It is possible that due to his connection with Storm Blaster, Justin still has access to the Turbo Powers and that due to T.J.'s connection to Lightning Cruiser may have given T.J. a spare Turbo Morpher (which T.J. would later use in Forever Red).

Justin was featured in a chronicle of Power Ranger history compiled by Tommy Oliver shortly after he formed the Dino Rangers, which was found by the nascent Ranger team in the Dino Lab.

Sixteen years since the fall of the United Alliance of Evil, a now 29 year old Justin fought alongside not only his own team but every single Ranger team in existence that was called upon by Tommy to join an army of Rangers comprised of teams from Mighty Morphin to Samurai to support the current Megaforce Ranger team in their last battle against the Armada. After helping the civilians, the Ranger army helped defeat the remaining X Borgs and Bruisers.

As the Blue Turbo Ranger, Justin controlled the Mountain Blaster Turbo Zord as well as the Siren Blaster Rescue Zord. Justin also piloted the Storm Blaster. Morphing into his Turbo Ranger form, he would also be physically enhanced to have a teenage-like body (this is due to the fact that his Super Sentai equivalent was a teenager). This was based on Kou of the Howling New Star from Gosei Sentai Dairanger and Riki from Chōriki Sentai Ohranger. 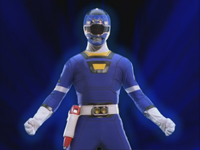