When the four soon-to-be UAOH soldiers were shot down by Baranoia troops, Juri remained confident that they would survive; after all, they were the best of the best. She found Momo's fear of snakes (one had crawled up her leg) irritating, but didn't have much time to call her out before Barlo Soldiers arrived. Unarmed, Juri resorted to clubbing them with branches or whatever else she could get her hands on.

OhYellow is among the Sentai warriors seen in clips when Miku Imamura (MegaPink) lectured Sae Taiga (GaoWhite) about the past female Super Sentai warriors and their shared mastery of disguise and habit of changing their clothing in the blink of an eye, something that Sae had never done before.

Years later, Juri fought alongside not only her own team, but every single Sentai Ranger in existence, against the Empire of Zangyack when it attacked the Earth in the Great Legend War. After fighting against hundreds of Gormin and their Zgormin commanders. Akarenger noticed the fleet moving towards them, he gathered all the Rangers together and gave them the order to sacrifice their powers to wipe out the first invasion's armada. The OhYellow powers are later used by Luka Millfy via the Ranger Keys.

After the Zangyack's final defeat, Marvelous returned the Ranger Keys to their original owners, it is assumed Juri and her teammates have their powers back.

Juri, alongside her team (bar KingRanger), among the majority of the Super Sentai heroes, was caught up in the "Super Hero Taisen" incident which eventually resulted in the Super Sentai teams and Kamen Riders joining forces to defeat both Dai-Zangyack and Dai-Shocker. During the final battle, she is seen in the background fighting Musca Worm and Rat Fangire.

OhYellow appeared with her team among the first 38 Super Sentai whom collectively empowered Wild Tousai Shuriken King in its fight against the titanic Gillmarda, granting the Ninningers and Zyuohgers the power to perform the Zyuoh Ninnin Super Sentai Burst which destroyed Gillmarda with the combined power of all 40 Super Sentai.

Juri joined the Super Sentai Strongest Battle as a member of Legendary Team, where she partnered with ChangePegasus and GoggleBlack in a three-way match against GoGreen, Yellow Racer, and Bouken Silver of Vehicle Team. Her team lost the match and thus were eliminated from the competition.

Juri uses martial arts researched in the United States but she also likes dancing and aerobics, which she uses in battle with great results. She loves fashion. Visor shape: = 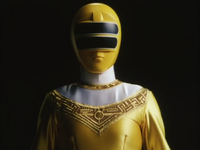 The OhYellow Ranger Key (オーイエローレンジャーキー, Ō Ierō Renjā Kī) is Juri Nijou's personal Ranger Key and what became of her powers after she along with the rest of the 34 Super Sentai sacrificed their powers to end the Great Legend War.

This key along with the majority of the Ranger Keys were collected by the Red Pirates and later used by the Gokaigers. The OhYellow Ranger Key was mainly used by Luka Millfy (Gokai Yellow), who used it to fight as OhYellow.

The Ohranger keys, along with all the Ranger Keys of the first 33 Super Sentai, were briefly taken by the Black Cross King and turned into Ranger puppets that were fought by the Gokaigers and the Goseigers. Splitting up, the puppet OhYellow was defeated as part of a group of surviving Yellow warrior keys by Gokai Yellow and Super Gosei Yellow.

After Zangyack were finally defeated, the Gokaigers gave the Ranger Keys back to their rightful owners. Juri received her key and became OhYellow once more.

Juri Nijou/OhYellow: to be added

OhYellow is among the vast pantheon of Rangers which are available in the mobile game Super Sentai Battle Base.

OhYellow appears with his team among all Sentai in the mobile game Super Sentai Legend Wars.