The Zenitts are cycloptic android footsoldier created by Gien from scrap. They are activated when a Londers Prisoner tosses a bunch of nuts and bolts that then transform into them. They're armed with sword-like rifles and can assume human form although they have been armed with bazookas and axes. When Gien left Don Dolnero, he took most of the Zenitts with him to assist him in his plans. During Gien's raid on the City Guardians Headquarters, he upgraded the Zenitt's armor to where the guns used by the City Guardians would no longer have any effect on them.

During the Great Annihilation, a single Zenitt was responsible for the death of TimeFire, Naoto Takizawa. Caught off-guard, Naoto was shot in the chest, causing him to fall from the railing of a high-story building all the way to the ground before sucumbing to his injuries soon after.

TV STORY-Case File 49: Beyond the Millennium

Several Junk Droid Zenitts were part of an army of past enemy grunts that were fought by the Gokaigers in Los Dark's ghost dimension which housed the 1500 spirits of the villains defeated by the Super Sentai. After losing some of their number in an initial skirmish, the remaining members from each grunt group merged to form the Combined Combatant. Though the stronger opponent, the Combined Combatant proved to be unstable due to internal conflicting among the grunts composing him over who got to finish the pirates off. Taking advantage, the Gokaigers used the Battle Fever J Ranger Keys to destroy the Combined Combatant with the Penta Force cannon. 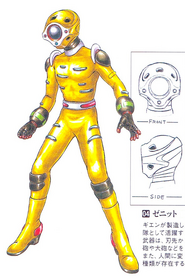