Path of the Righteous

It once wielded a weapon called the Setsukon. The Enemy Within (Jungle Fury)

The Jungle Pride Megazord's main method of combat is linked to the simultaneous actions of the Rangers inside, seen throughout all its appearances. Each ranger is connected to each of their spirit's physical manifestation and to the Megazord as a whole, as seen when they are attacked and knocked down.

In one particular case, when the Rangers were fighting Monkeywi in Friends Don't Fade Away, Monkeywi attacked the Cheetah Animal Spirit leg of the Megazord, not only affecting the team but seemingly injuring Lily more than the others, removing her from the fight and forcing RJ to step in with his Wolf Animal Spirit and help finish the fight.

The Jungle Beasts, also known as Animal Spirits, Jungle Spirits, or Beast Spirits, serve as both the spirit/energy manifestation and zords of the Jungle Fury Power Rangers, Dai Shi, Camille, and Whiger. They are solidified representations of each of their beast spirits. It is notable that these zords/spirits can be accessed even in non-zord skirmishes and serve as finishers for each ranger.

The Tiger is the Jungle Fury Red Ranger's animal spirit.

Its spirit is usually summoned during skirmishes to battle the Rinshi, as opposed to Roar Max Zords which are used to battle giant Rinshi beasts. Glowing with red energy, it usually charges at opponents once summoned and tugs at them rather mercilessly with its bites or tackles them with sheer force.

It solidifies into a zord and forms the torso, head and arms of the Jungle Pride Megazord. The Red Ranger summons his Jungle Beast by saying "Call to the beast inside! Free the Tiger!" It also has the ability to pounce on and crush the opposition with tiger strength attack

RJ, the Jungle Fury Wolf Ranger, has the ability to duplicate this spirit and combine it with his own to form Wolf Pride Megazord.

Jimmy, a student in Casey's Karate class, in the episode "Tigers Fall Lions Rise", also has the Tiger spirit.

The Jaguar is the Jungle Fury Blue Ranger's beast spirit. It solidifies into a zord and forms the left leg of the Jungle Pride Megazord.

When released it usually does front flips and spins to attack its opponents, as opposed to the Cheetah and Tiger spirits who charge at the opponent outright.

The Blue Ranger summons his Jungle Beast by saying "Call to the beast inside! Unleash the jaguar!"

RJ, the Jungle Fury Wolf Ranger, has the ability to duplicate this spirit and combine it with his own to form Wolf Pride Megazord.

The Cheetah is the Jungle Fury Yellow Ranger's animal spirit.

Like the Tiger Animal Spirit, it charges at opponents, but at a higher speed. It is usually summoned to battle the Rinshi footsoldiers.

It solidifies into a zord and forms the right leg of the Jungle Pride Megazord on most occasions. At times though, it gives way to the Wolf Animal Spirit.

The Yellow Ranger summons her Jungle Beast by saying "Call to the beast inside! Bring out the cheetah!" 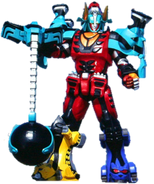 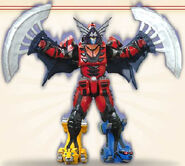 Retrieved from "https://powerrangers.fandom.com/wiki/Jungle_Pride_Megazord?oldid=975776"
Community content is available under CC-BY-SA unless otherwise noted.