Ghost of a Chance

To Earn Your Stripes

The Jungle Master Megazord is the combination of three rangers' newly acquired spirits, Gorilla, Penguin and Antelope as Jungle Beasts.

These spirits were acquired after a trial by three of the greatest Pai Zhua masters. They can only be used in conjunction with Jungle Master Mode.

The finisher for this Megazord is simply called the Jungle Master Fury Fists where the Megazord would charge it's fists up with red fire and charge at the monster, swinging them around in the process, It would then smack it's hands into the sides of the monster, each blow reducing more and more of them to dust, until just the waist is left where it then explodes.

The Gorilla Animal Spirit is Jungle Fury Red Ranger's second animal spirit/zord. After Casey conquered his fears and passed Master Rilla's test, he gained the ability to summon it.
Gorilla is Master Rilla's spirit pass to Casey along with the Jungle Master power.

It forms the head, arms and entire body of the Jungle Master Megazord.

It forms the left leg of the Jungle Master Megazord.

The Penguin Animal Spirit is Jungle Fury Yellow Ranger's second animal spirit/zord. After Lily passed Master Guin's test, she gained the ability to summon it. It is unique from the other Animal Spirits in that it has its own vehicle, a board.

The board and the Penguin combine to become the right leg of the Jungle Master Megazord. The front of the board also disconnects to form the helmet of the Megazord.

They can also combine with the Roar Max Zords for added power.

Jungle Master Megazord with the power of the Elephant attached 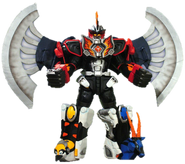 Jungle Master Megazord with the power of the Bat attached

Retrieved from "https://powerrangers.fandom.com/wiki/Jungle_Master_Megazord?oldid=947302"
Community content is available under CC-BY-SA unless otherwise noted.