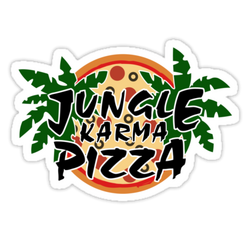 Jungle Karma Pizza is a pizza parlor owned by Robert "RJ" James in the city of Ocean Bluff, California. On the second floor of the building is a large living area acting as the base of the Jungle Fury Rangers.

The main area of the downstairs is made up of the main dining area complete with cashier stand and the kitchen at the very back of the building. The kitchen is very ordinary with pizza ovens and the appropriate cooking tools but there is a back door to a street for deliveries (though these are never shown) and a parking area for the delivery vehicles. The second floor is completely occupied by at least five bedrooms and a large living area where RJ is often seen lounging in an armchair in front of an old fashioned TV displaying the action. However, this only occurs in the early episodes prior to becoming the Jungle Fury Wolf Ranger after which it was rarely used by anyone except for Fran, and even then only when she has no customers.

Jungle Karma Pizza lacks a Zord bay as Animal Spirits are manifested directly from Morphin Grid energy fused with Solar Morpher technology. A garage is located somewhere in the building that houses the pizza delivery vehicles and the Strike Rider, though said garage is never seen. A tunnel slide is located in the top floor loft that take the Rangers outside the building without having to go through the restaurant front door. To do so, the Rangers snatch up vines and have to Tarzan swing on them into the tunnel slide which takes them out of the building through a back area never shown to the audience.

Sometime after striking out from his father Master Finn as a result of disagreements over what Animal Spirit that he should have, RJ settles down and establishes Jungle Karma Pizza as a source of income. Sometime after this, he meets and hires Fran to act as the cashier whilst he handles the cooking.

TV STORY-One Master Too Many

A few years later, Casey Rhodes, Theo Martin and Lily Chilman arrive after Jarrod accidentally releases Dai Shi from captivity. This is under orders from the late Master Mao to find their new master there to teach them how to combat Dai Shi. Said mentor turns out to be RJ although they don't realize this until he saves them from Camille at which point they become employees.

Some months later, RJ and Jarrod's old friend Dominic Hargan arrives in Ocean Bluff for a visit but later becomes the Jungle Fury Rhino Ranger. After destroying Crocovile, he becomes a proper staff member as the delivery driver.

TV STORY-Path of the Rhino

At the end of the Final Beast War and after the death of Dai Shi, Casey leaves the Pizzeria for good in order to take Master Mao's place as the head of the Order of the Claw and both Dominic and Fran leave for a world tour. However, Theo and Lily stay behind with RJ to run the business with Flit (now a human after Camile freed him) becoming a new staff member.