On April 27 2014, Loudermilk held a wedding reception and married Brianna Rose Endrina, in which the other cast-members attended. 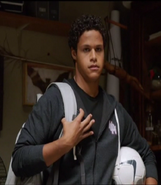 Jake in Noah's body
Add a photo to this gallery

Retrieved from "https://powerrangers.fandom.com/wiki/John_Mark_Loudermilk?oldid=890721"
Community content is available under CC-BY-SA unless otherwise noted.