Nicknamed "the Sky Cowboy," Joel was an aerial stuntman and was recruited by Captain Mitchell to be the Green Lightspeed Ranger.

He was extremely reluctant to become a Power Ranger at first, not believing in Lightspeed or what it had to offer, but when he saw his beloved Mariner Bay in danger, he decided to take them up on their offer.

He showed interest in the Rangers' assistant, though his first attempt to impress her went awry when he mocked the "computer geek" who wouldn't let him fly the way he wanted to on his first mission.

TV STORY-Lightspeed Teamwork After Queen Bansheera had been defeated once and for all, Rawlings and Ms. Fairweather were about to go out on their first date when he was called away on Ranger business, unable to let his duties end with the demons.

He eventually married Ms. Fairweather, and the two were seen heading off on their honeymoon right when he got a call from Carter. Not realizing the importance of the call he told him it had to wait. His wife, figuring it must have been something important, snatched his cellphone and heard Vypra had returned and told him Joel would be there. He then returned to the team to help battle Vypra with the Time Force Power Rangers. He fought alongside his Green Ranger successor.

The Lightspeed Rangers were featured in a chronicle of Power Ranger history compiled by Tommy shortly after he formed the Dino Rangers, which was found by the nascent Ranger team in the Dino Lab.

Joel and the other Lightspeed Rangers returned as part of the army of Legendary Rangers that helped the Mega Rangers defeat the Armada once and for all, fighting in a huge battle against hundreds of X Borgs and dozens of Bruisers.

When events set into motion by Lord Drakkon caused the timeline to split into pocket universe, each anchored on a powerset, the Lightspeed Rangers were split off into their own pocket universe. Lord Drakkon then attacked them. Later, he was seen in Promethea, when it was already in another dimension.

When the timeline was restored, so was Joel.

Joel's Green Lightspeed Ranger helmet and the other several Ranger helmets are seen in Jason Lee Scott's flashback and vision to the battle on the Moon of Shattered Grid.

Joel is easily the most arrogant of all the Lightspeed rangers, having a record of preferring to disobey orders in favor of his stunts. One example was when he decided against Angela, the one who designed his zord, orders to do what he wanted. This would later backfire when he gave her flowers in an attempt to impress her then berated her (unknowingly), causing his first attempt to win her heart to fail miserably. Over the course of Lightspeed Rescue, Joel starts to mature greatly, eventually enough to win him his long-time crush's heart, resulting in them being married a year later.

Green Lightspeed Megabattle were created by Angela and Clark Fairweather; they were activated by dialing 8-6-1 on the Battle Booster. 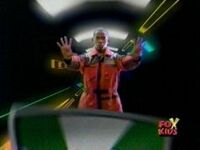