For the ninja Metal Hero who guest stars in Ninninger, see Toha Yamaji.

Jiraiya (ジライヤ, Jiraiya) is NinjaBlack (ニンジャブラック, Ninja Burakku) of the Kakurangers. He is a descendant of Jiraiya from the Warring States Era. He is 20 years old (37 in Gokaiger), he is a Japanese-American ninja from Los Angeles trained by his guardian Gali after his father was killed.

Jiraiya's clan's ancestors long ago moved to America, and had been out of contact with Japan for many years.

When Jiraiya was a child, his father was killed by what he thought at the time was a Youkai. Since then, he was raised by Gali, a friend of his father's and his mentor.

He first met the Kakurangers when he was pretending to help the Youkai Oboroguruma. He was, in fact, trying to claim the scrolls Oboroguruma's boss, Azukiarai, had stolen centuries beforehand. These scrolls would allow him and the other Kakurangers to become Giant Beast Generals. This course of action only resulted in him getting captured and dumped into a volcano. He was saved by his ancestor, who gave him a lecture and entrusted him with a Doron Changer, allowing Jiraiya to become NinjaBlack. He then joined the other four Kakurangers, completing the team.

While finding his Shinobi Scroll, Jiraiya was forced to battle Gali, who revealed himself to be the man who killed Jiraiya's father and is now in service of the Yokai. After the bloody battle between them, Jiraiya learned why Gali did it, as well as hoping Jiraiya would kill him as intended. Both the deaths' of Zashiki-warashi and the two men he had known since childhood give Jiraiya his reason for fighting the Youkai.

When Emperor Daidas and his army invaded Earth, Jiraiya, alongside his team, joined with the four Sentai that came before them, the Dairangers, Zyurangers, Jetmen, and Fivemen, to defeat him.

NinjaBlack is among the Sentai warriors seen in clips when Daimon Tatsumi (GoYellow) lectured Kai Samezu (GaoBlue) about the past Sentai technical warriors and their fighting spirit.

Years later, Jiraiya fought alongside not only his own team, but every single Sentai ranger in existence, against the Empire of Zangyack when it attacked the Earth in the Great Legend War. After fighting against hundreds of Gormin and their Zgormin commanders. Kaijou noticed the fleet moving towards them, he gathered all the Rangers together and gave them the order to sacrifice their powers to wipe out the first invasion's armada. The NinjaBlack powers are later utilized by Don Dogoier via the Ranger Keys.

After the Zangyack's final defeat, Marvelous returned the Ranger keys to their original owners. It is assumed Jiraiya, Tsuruhime and their teammates have their powers once again and will work alongside Ninjaman to cut down evil in the shadows once more.

Jiraiya, alongside his team (bar Ninjaman), among the majority of the Super Sentai heroes, was caught up in the "Super Hero Taisen" incident which eventually resulted in the Super Sentai teams and Kamen Riders joining forces to defeat both Dai-Zangyack and Dai-Shocker.

NinjaBlack appeared with his team among the first 38 Super Sentai whom collectively empowered Wild Tousai Shuriken King in its fight against the titanic Gillmarda, granting the Ninningers and Zyuohgers the power to perform the Zyuoh Ninnin Super Sentai Burst which destroyed Gillmarda with the combined power of all 40 Super Sentai.

team that did not participate in the Chou Super Hero Taisen

tournament, exclusively featuring in a promotional conference for the film.

Jiraiya stands out among the characters because he speaks English frequently (which at first caused both teasing and confusion with the other team members when he speaks in English), his native language, but he learns Japanese as the show progresses. He is the pure fighter of the group and although he is skilled in Earth based ninja arts he prefers to fight utilizing his martial art skills, and is portrayed with a combination of the stereotypical cowboy and surfer persona. Unlike the other Kakuranger however, Jiraiya is at times a loner, and will often venture out to battle an enemy on his own. He is very fond of television, often becoming obsessed with fighting-based shows to the point he'll mindlessly emulate them in a fit of enthusiasm. He supposedly corresponds to Yulong. 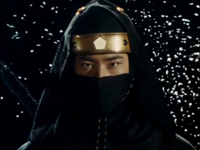 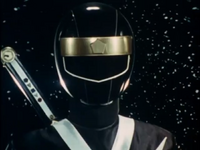 The NinjaBlack Ranger Key (ニンジャブラックレンジャーキー, Ninja Burakku Renjā Kī) is Jiraiya's personal Ranger Key and what became of his powers after he along with the rest of the 34 Super Sentai sacrificed their powers to end the Great Legend War.

This key along with the majority of the Ranger Keys were collected by the Red Pirates and later used by the Gokaigers. The NinjaBlack Ranger Key was mainly used by Don Dogoier (Gokai Green), who used it to fight as NinjaBlack. It was also used by Luka Millfy (Gokai Yellow) on one occasion.

The Kakuranger keys, along with all the Ranger Keys of the first 33 Super Sentai, were briefly taken by the Black Cross King and turned into Ranger puppets that were fought by the Gokaigers and the Goseigers. The Kakuranger keys were defeated by Gokai Green.

After Zangyack were finally defeated, the Gokaigers gave the Ranger Keys back to their rightful owners. Jiraiya received his key and became NinjaBlack once more.

A female version of NinjaBlack as seen in Gokaiger.

NinjaBlack is among the vast pantheon of Rangers which are available in the mobile game Super Sentai Battle Base.

NinjaBlack appears with his team among all Sentai in the mobile game Super Sentai Legend Wars.