"I've had it with being an Org. This is ridiculous! I can't trust any of you, especially you. You've lied and cheated and have destroyed anyone around you. For 3,000 years, Toxica and I waited for your return and for what? You've betrayed your most loyal Duke Orgs, ones who would do anything for you, including cutting off their own horns. You are beyond evil. You have no heart. You don't deserve anyone's loyalty. You've destroyed my best friend and my faith in Orgs."
―Jindrax angrily renouncing his service to Master Org for his betrayal and getting Toxica killed.

Jindrax is the "Duke of Orgs" and the Master of Blades, as he uses knives and swords in battle. He had an unofficial rivalry with Taylor Earhardt and is the best friend (and, possibly, the love interest) of Toxica, the "Duchess of Orgs" and Mistress of Magic. He seemed to have had a crush on Princess Shayla, (which Toxica seemed to be fairly jealous of), but a deep love for Toxica. He resurrected Toxica from Spirit World using her re-energized severed horn. He retired from serving as an Org leader and now travels the world with Toxica so they can find themselves.

Jindrax is known for his skill with knives and occasionally swords, and uses them constantly in battle - he was particularly a contentious battle rival to Taylor (Yellow Ranger). In a few episodes, he causes monsters to grow using Toxica's staff and reciting the spell, "Evil spirits of toil and strife, give this fallen Org new life!" He is also fond of the word "Inconceivable".

He was later transformed and brainwashed, along with Toxica, into Super Jindrax by Master Org after they discovered that he was a human. He is released from this state after being defeated by the Animarium Armor, and set out with Toxica to free the general Mandilok; together, they were able to depose Master Org (who has since lost his powers) and seemingly kill him for good. However, the two were mistreated under Mandilok, and Toxica was actually destroyed in battle with the Rangers.

He has a brother named Juggelo, who was imprisoned along with the other Orgs 3000 years ago. Together, the two form "Team Carnival" (a reference to their clown like appearances). In one episode, Jindrax eats Toxica's magic beans to grow large and fight alongside Juggelo. After Juggelo is destroyed, the effect of the beans wears off and Jindrax shrinks to his normal size. This makes him the only Org ever to grow large and return to normal (indeed, Toxica warned him that this was normally not possible). After Juggelo's death, Toxica joins Team Carnival in his stead.

Jindrax later brought Toxica back from the Spirit World which she had been sent to after her death by charging her severed horn with energy from the Rangers' weapons. The two aided the Rangers in a battle against Master Org and his revived Duke Org Generals, including Retinax, Nayzor, and Mandilok. After the battle he then leaves to travel the world with Toxica and "find himself".

Though he can be goofy and harmless at times, he is ruthless, sadistic, and arrogant, and is willingness of do whatever it takes to prove his undying loyalty to Master Org. In his many battles with Taylor, he often calls her 'missy' as a mocking gesture to throw her off and to gain the upper hand in battle. His rivalry of Taylor is obsessive to the point that he has even tried to kill her while unmorphed on multiple occasions (such as Team Carnival), to no avail. He has an amicable and sibling-like relationship with Toxica, and the two often work together through thick and thin, until her death. When she died, he decided that being an Org is not worth it and outright denounces his loyalty to Master Org, saying he has "no heart". This proves that while he can alternate from being a goofball to a serious and vicious villain from time to time, he always has a sense of morality and would choose his best friend over his loyalty to Master Org. After rescuing Princess Shayla in Sealing the Nexus, Jindrax and Toxica no longer consider themselves as enemies to the Rangers, instead vowing to travel the world to embark on a new life. He even apologizes to Taylor for giving her so much trouble over the years, ending his 'legendary rivalry' with Taylor, which she begrudgingly accepts but later on acknowledges. 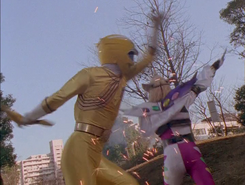 Jindrax and Taylor duking it out (Episode 3) 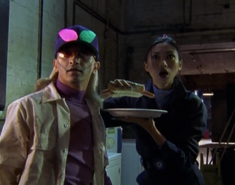 Retrieved from "https://powerrangers.fandom.com/wiki/Jindrax?oldid=1052121"
Community content is available under CC-BY-SA unless otherwise noted.