Welcome to the Jungle (1)

"With the spirit of the mighty lion!"
―Jarrod's roll call[src]

Jarrod is a Pai Zhua student and one of the guardians who served as the vessel of the evil Dai Shi. As the user of the Lion Spirit, he possessed his own Ranger-like form known as the Black Lion Warrior.

Jarrod was initially a normal child in a farm. He would stay at a neighbor's house whenever his very busy parents aren't home. Then when he moved to the city of Ocean Bluff who was so alone, that he became the victim of intense bullying by five fellow kids. Eventually, they cornered him in a playground and beat the living biscuits out of him. Having had enough however, Jarrod became so enraged that he unleashed a giant energy wave from his body that sent them flying (said energy wave proving to be the Lion Animal Spirit). Sometime after that, he either heard about the nearby Pai Zhuq school or was approached personally by it's leader Master Mao and ended up joining it to learn to harness his Lion Animal Spirit for 10 years.

Jarrod was to be one of the three guardians alongside Theo Martin and Lily Chilman to hold the position of guarding the chest holding the evil known as Dai Shi. But when he showed himself to bully others and misuse his powers, Mao decided on selecting Casey Rhodes, much to Jarrod's anger as he stormed off. Jarrod eventually confronted Mao in Dai Shi's cavern and challenged his master; in the ensuing struggle, he accidentally tipped over the box holding Dai Shi's spirit before fleeing after realizing what he had done. However, Dai Shi located Jarrod and possessed him for his strength, knowing that he was weak in spirit and would be helpless to resist.

Eventually Jarrod begins to fight back against Dai Shi, having never wanted to hurt anyone. He first shows signs of resistance by sparing Whiger instead of killing the on the spot much to concern of everyone present, then later thanks Camille for staying by his side, causing her, Dai Shi, Scorch and Snapper much alarm, the generals deducing that Camille is unintentionally drawing out Jarrod's spirit and have Osiris, Sonimax and Lepus try to kill Camille for her "betrayal". Jarrod, aware of the plot, manages to gain enough control to confront the three Phantom Beast warriors and kills both Osiris and Sonimax to Casey's surprise, who had heard and was observing the fight. Apart from Casey, no one appeared to notice that Jarrod was speaking in his own voice and not Dai Shi's.

Believing that Jarrod had redeemed himself by this unusual act of kindness to Camille, Casey confronted Jarrod alone in Dai Shi's castle and defeated him in a grueling fight. However, he refused to kill Dai Shi and instead allowed the evil dragon to slay him. Jarrod, now remorseful for his actions, stopped Dai Shi from killing Casey and managed to expel the evil spirit from his body. After Dai Shi fled, he and Camille left to the lower level of the Pai Zhuq temple. He initially refused to help due to his role in unleashing Dai Shi, but eventually convinced himself to help out after Camille had left to help the Rangers. Having gained a noble heart, Jarrod evoked his Lion Spirit and dove straight into Dai Shi, weakening the dragon long enough for Casey, Theo and Lily to launch a powerful blast to kill him for good. Jarrod was thrown out as the dragon died, shaken but still alive.

At the end of the series, Jarrod decided to re-enroll in the Pai Zhuq academy when Camille enrolls herself to the academy as beginners feeling there was more they needed to learn. Jarrod and Casey were now firm friends, and Casey allowed Jarrod to take over his class whenever he was away.

When Gia says to Noah about the Order of the Claw's logo, Noah investigates and discovers that the logo belongs to the Jungle Fury Rangers, the Ranger team that utilized martial arts. Jarrod is shown on the screen of the Legendary Database.

Jarrod was not shown to have fought in the final battle between the Legendary Rangers and the Armada which is likely because of his new student status.

Jarrod was the bearer of the Lion Spirit but was also known to be arrogant and bully others, misusing his Animal Spirit. Due to this, Mao ended up selecting Casey as his replacement due to standing up against him and witnessing Jarrod's cruelty first-hand. Out of anger of not being given his chosen duty, he confronted Mao and impulsively dueled him, accidentally breaking the box Dai Shi was imprisoned in and resulting in Mao's death. However, Jarrod had no malicious intent as he was confused and lost.

Dai Shi would take advantage of his indecisiveness by possessing his body and sealing Jarrod's soul away. The remaining Pai Zhuq masters knew that Jarrod was not maliciously evil and that his noble Lion Animal Spirit would result in Dai Shi's downfall. True to their prediction, Jarrod eventually saw how cruel Dai Shi was and began to slowly resist his influence, such as being kind to his servant Camille who likewise returned the sentiment and was attracted to his charm, causing her to doubt Dai Shi's cause. He also spared Whiger by expelling him (although after stripping him of his Rinzin) instead of outright killing him for his failure, much to the surprise of his fellow general Scorch.

After being freed from Dai Shi's influence, Jarrod shows immense remorse for the actions he was forced to fulfill while under Dai Shi's influence and initially believed that he could not be redeemed. After Camille left to help the Rangers against her former master, Flit eventually convinced Jarrod that he could change for the better. After assisting in killing Dai Shi, Jarrod decided to relearn under Casey's guidance, feeling that he had much more to learn despite being proficient in the way of the Lion. 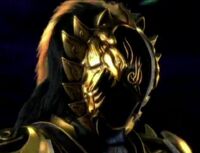 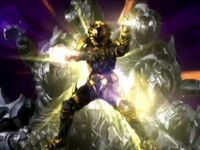 Dai Shi in Jarrod's body is among the many Rangers who feature in Power Rangers Legacy Wars, he is a Legendary (Leader), Legendary (Assist) character.

Dai Shi in Jarrod's body as Black Lion Warrior and Phantom Beast King is a playable character in Power Rangers: Battle for the Grid.