A teacher of karate and other sports to children at the Athletic Club and the leader of the Denzimen.

DenziRed was one of the seven previous Red Warriors who came to assist the Maskmen against a group of five revived villains.

Ippei and his team joined up with the other nine Sentai to stand behind the newest Sentai, the Turborangers, as they faced off against the Hundred Boma Tribes.

DenziRed is among the Sentai warriors seen in clips when Daimon Tatsumi (GoYellow) lectured Kai Samezu (GaoBlue) about the past Sentai technical warriors and their fighting spirit.

Led by his Liveman successor Red Falcon, he appeared as one of 24 previous Red Rangers in Gaoranger vs. Super Sentai together with fellow Red Rangers from his predecessors Akarenger to Battle Japan to his successors from VulEagle to TimeRed.

As the fourth Red, DenziRed's Red Warrior Spirit was embodied by AkaRed.

Years later, Ippei fought alongside not only his own team, but every single Sentai Ranger in existence, against the Empire of Zangyack when it attacked the Earth in the Great Legend War. After fighting against hundreds of Gormin and their Zgormin commanders. Kaijou noticed the fleet moving towards them, he gathered all the Rangers together and gave them the order to sacrifice their powers to wipe out the first invasion's armada. The DenziRed powers are later utilized by Captain Marvelous via the Ranger Keys.

After the Zangyack's final defeat, Marvelous returned the Ranger Keys to their original owners. It is assumed Ippei and his team have their powers once again.

Ippei, alongside his team, among the majority of the Super Sentai heroes, was caught up in the "Super Hero Taisen" incident which eventually resulted in the Super Sentai teams and Kamen Riders joining forces to defeat both Dai-Zangyack and Dai-Shocker. During the final battle, he is seen teaming up with Red Flash to fight Zodomas.

DenziRed, with fellow Red heroes Red Hawk and HurricaneRed, was part of a force of Sentai and Rider reinforcements led by Akarenger and Kamen Rider #1

was destroyed and the battle was finally over, DenziRed appeared standing on a cliff with all the other heroes who appeared to help, to say goodbye to the heroes of recent years before taking their leave.

In the first episode of Hikonin Sentai Akibaranger, when Mitsuki Aoyagi says that Nobuo Akagi is an old man after he reveals he's 29, Nobuo thinks of Ippei, along with Ryu Tendo (Red Hawk) of Choujin Sentai Jetman, saying "What would the great Sentai Reds do at a time like this?"

DenziRed appeared as part of a conference of the first 38 Reds led by Red Falcon, whom addressed the Ninningers and Zyuohgers as the greater Super Sentai pantheon intervened to save them from defeat at the hands of the titanic Gillmarda. Empowering the Combination Nin Shuriken to form Wild Tousai Shuriken King, the first 38 Super Sentai further imbued their successors with the power to perform the Zyuoh Ninnin Super Sentai Burst, destroying Gillmarda with the combined power of all 40 Super Sentai.

Ippei alongside with his Sentai Red Ranger predecessors appeared to help the Zenkaigers.

During the climatic final battle itself, he can be seen fighting alongside Kamen Rider Stronger, Red1, Kamen Rider Build and Kamen Rider Espada. 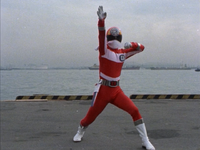 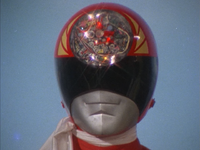 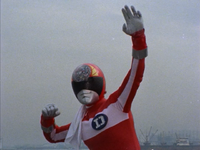 The DenziRed Ranger Key (デンジレッドレンジャーキー, Denji Reddo Renjā Kī) is Ippei Akagi's personal Ranger Key and what became of his powers after he along with the rest of the 34 Super Sentai sacrificed their powers to end the Great Legend War.

This key along with the majority of the Ranger Keys were collected by the Red Pirates and later used by the Gokaigers. The DenziRed Ranger Key was mainly used by Captain Marvelous (Gokai Red), who used it to fight as DenziRed. It was also used by Joe Gibken (Gokai Blue) and Gai Ikari on one occasion each.

After Zangyack were finally defeated, the Gokaigers gave the Ranger Keys back to their rightful owners. Ippei received his key and became DenziRed once more.

The Denziman Ressha (デンジマンレッシャー, Denjiman Ressha) currently only exists as a sound on the ToQ Changer.

arrive to assist the Sun Vulcan.

arrive to assist the Goggle V.

Ippei Akagi/DenziRed: Denziman's Leader. An expert in hand-to-hand combat, he possesses special techniques which applies karate and boxing. He is always teaching karate to children at an athletic club

DenziRed is among the vast pantheon of Rangers which are available in the mobile game Super Sentai Battle Base.

DenziRed appears with his team among all Sentai in the mobile game Super Sentai Legend Wars.