The Infinity Chain Card (無限連鎖カード Mugen Rensa Kādo) (37-39) is a powerful Psyma Magic Card created by the Spell-Master Pierre whose special power is to analyze all attacks of GoGoFive weapons, where an attack hits and therefore prevents it from being useful against the next carrier who uses it. With each attack the carrier receives, the card will scan it, and even if said carrier is destroyed, the card will remain intact, while all of GoGoFive's techniques and attacks weapons will be registered by it. The next carrier to use this card becomes more powerful than the previous carrier, to the point GoGoFive's energy weapons will not work on it. Pierre used this card to merge it with the Psyma Beasts of the Dragon Dark King Salamandes in a plot to take down GoGoFive, scanning the attacks and abilities of his weapons to create an invincible Psyma Beast capable of destroying them. There were only three carriers and, in the end, the last carrier and the card itself were destroyed when the GoGoFive used Victory Mars to launch them into the sun.

The destruction of the card would end up being the last straw, causing Salamandes to fall completely out of favor with Grand Witch Grandiene, thus leading to his final battle with the GoGoFive. 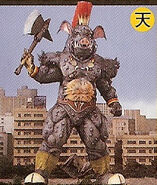 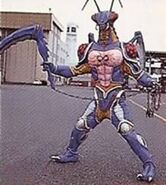 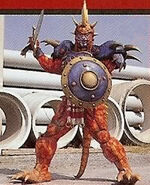 Lizardes
Add a photo to this gallery
Retrieved from "https://powerrangers.fandom.com/wiki/Infinity_Chain_Card?oldid=891177"
Community content is available under CC-BY-SA unless otherwise noted.