Ian is 23 years old at the beginning of Kyoryuger.

Near a castle in Europe, Ian defeated Zyudenryu Parasagun, and gained its’ power. A Sniper with tricky moves, he declares himself the “Bullet Hero” (弾丸の勇者, Dangan no Yūsha).

He was originally a studier of ancient civilizations who lost his best friend Shiro Mifune in Europe during the Deboss Army's initial attack to a cloaked Sorrowful Knight Aigaron.

He was the last to join the Kyoryugers as he was afraid of getting close to others after Shiro's death. During Debo Doronbosu's attack, he recognizes the cloak Doronbosu was wearing and assumes he is Shiro's killer. When Kyoryu Red is captured by the monster, Ian attempts to shoot Doronbosu but memories of Shiro's death interrupt his shooting.

During Doronbosu's second attack, Ian attempts to take him on again using the Kentrospiker Zyudenchi. The power, however, of the Zyudenchi is too much for him to handle and the recoil sends him at Kyoryu Red and both crash into a car. Later on Daigo calls out Ian's identity as Black. Ian, however, waves Daigo off and states that he doesn't need him or the team. Daigo is persistent and gets Ian to open up.

Doronbosu attacks the city once more and during his fight with the untransformed Kyoryugers, captures Daigo. Ian joins the fight and this is able to make the shot he was unable to do before and frees Daigo. Ian officially joins the team and all five transform to take on Doronbosu. Ian then gets the idea that Kentrospiker can be used through their Armed weapons. All five combine their weapons and destroy Doronbosu. After defeating an enlarged Doronbosu with Kyoryuzin Western, becomes at peace and continues to fight with the team.

During their testing of several Zyudenchi, Souji becomes annoyed of Ian's joking and laid back attitude. Ian infuriates him more when he calls Souji green boy. During their fight with Debo Batissier, Souji becomes furious when believes Ian is using him as a meat shield. After meeting Ramirez and his hearing his plight with his partner Zyudenryu Ankydon, Ian realizes he is a ghost and cannot do much to help. Ian reassures Ramirez that he and the team will get Ankydon back.

A Zorima was disguised as Kyoryu Black by Debo Yakigonte on two separete occassions as part of a plot to break the Kyoryugers up, with the first one telling Amy that she was fat and the second one tried to make King mad, though King's idiocy made that impossible.

During their search of the Batissier, Ian splits from the group in order to let Souji cool off. He encounters the monster and attempts to fight him by himself after analyzing his attack from earlier. His teeth, however, are much tougher than he anticipated and ends up getting cavities himself. Souji then comes to his rescue and makes amends with him after realizing Ian is much kinder than he appears and doesn't exploit his emotions too often. The team then comes together and defeats Batissier. Ian eases up on his teasing on Souji, but calls him boy instead of green boy.

TV STORY-Brave 5: Boom! The Cavities of Ankydon As time goes on, he becomes more and more an integral part of the group, valuing their friendship and their growth, especially Souji's, whom Ian starts to call by name rather than boy in the wake of Transcendenterfly God Deboth's final offensive against Earth, thus recognizing how strong he grew since they first met.

With Daigo as Kyoryu Red Gabutyra Human, Ian was named acting leader of the team. Ian originally did not want to be leader, due to the heavy burden it would place on him. But if he rejected the offer, he was sure Daigo would laugh at him. The others agreed that Ian should be leader. Ian accepted the leadership and led the rest of the team into battle.

TV STORY-Brave 26: Surprise! GabutyraMan It was he who first suggested that to understand the power of the Zyudenchi that turned Daigo into Gabutyra, they would have to understand Gabutyra's desire to be with Daigo.

Afterwards, he discovered that the stones that Torin, Dantetsu, and the Spirit Rangers were gathering were the fossils of the thirteen Guardian Beasts. Of the four that remained, the third was found by one of Ian's past girlfriends, Erika, who also explained to Utseminaru that Ian's player tendencies were part of a campaign to provide support to women who needed it. Only when this disconnect between Kyoryu Black and Gold was healed that the team could use the Maximum Zyudenchi along with the Victory Zyudenchi.

During the Christmas battle against five clones of Deboss, Ian fought along Utseminaru and Souji in Pteraraiden-oh and Spinodai-oh, both of which were in Western mode. He then piloted Gigant Kyoryujin alongside Daigo, Nissan, Souji, Amy, and Torin in the battle against Debo Yanasanta x345.

In the final battle against Deboss, Ian fought alongside Souji to keep Zourima off of Daigo and Amy, dual-wielding their Gaburevolvers. He would then fight along Nissan and Souji to protect the Spirit Base. Upon Daigo's disappearance (along with Parasagun and the other Zyudenryuu), he seemed disinterested in women, instead looking at his Zyudenchi for the first sign that they had survived. When they recharged, he met the others to welcome Daigo home, rebuking him for nearly breaking his promise to not die first.

Kyoryu Red headed out to the warehouse, where the rest of the Zangyack and Vaglass were. Then the others, Black, Blue, Pink, and Green arrive. The Kyoryugers beat them and left the rest for the Gokaigers and Go-Busters.

Ian and his teammates are reacquainted with the Go-Busters and later fight alongside the Abarangers and Zyurangers against Space War God Voldos and his army.

Ian and the other Kyoryugers were summoned by the SP Zyudenchi to help their descendants defeat Remorseful Knight Arslevan.

Kyoryu Black appeared with his team among the first 38 Super Sentai whom collectively empowered Wild Tousai Shuriken King in its fight against the titanic Gillmarda, granting the Ninningers and Zyuohgers the power to perform the Zyuoh Ninnin Super Sentai Burst which destroyed Gillmarda with the combined power of all 40 Super Sentai.

Ian is a cheerful and talkative charmer who loves to flirt with girls, especially Amy Yuuzuki earlier on in Kyoryuger. He is the gag-maker of the group who never one to miss a joke, often at the expense of people's feelings (often Nobuharu). However, despite his personality, he has a checkered past.[1]

Regardless, Ian is very loyal and will fulfill any promise he has made. He is also intelligent and quick-witted, allowing him to come up with plans to take down opponents quickly with maximum efficiency, as well as making back-up plans in case something should pop up.

Ian also has the habit of saying the phrase "Oh, my!" to express shock, surprise, and disappointment.

Armed On (アームドオン, Āmudo On) is Kyoryu Black's extension form accessed by using two copies of the Parasagun Zyudenchi in his Gaburivolver. Sporting spiky silver armor across his right arm, Armed On gives Kyoryu Black access to his Zyuden Arms weapon, the Parasa Shot.

When the Deinosgrander claws are clutched together and the Gaburivolver's trigger is pulled, the user can drill through layers of solid rock, as well as underground, in a fashion similar to the "death-roll" technique crocodiles use.

As Kyoryu Black, his suit actor is Yasuhiro Takeuchi (竹内 康博, Takeuchi Yasuhiro), who was previously the suit actor for Blue Buster in Tokumei Sentai Go-Busters and would later serve as suit actor for ToQ 4gou in Ressha Sentai ToQger and RyusoulBlack in Ryusoulger . 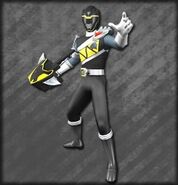 Kyoryu Black appears with his team in the Nintendo 3DS Zyuden Sentai Kyoryuger: Game on Gaburincho.

Kyoryu Black is among the vast pantheon of Rangers which are available in the mobile game Super Sentai Battle Base.

Kyoryu Black appears with his team among all Sentai in the mobile game Super Sentai Legend Wars.