Hunter Bradley is the Crimson Thunder Ranger, of the Ninja Storm Power Ranger team, and the adoptive elder brother of Blake Bradley, the Navy Thunder Ranger. Initially brooding and standoffish, Hunter eventually learns the value of friendship and teamwork outside of himself and Blake through his time as a Ranger and later warms up to the Wind Rangers. He and Blake share a joint love for motocross which later leads to them getting a job at Storm Chargers.

Not a lot is known about Hunter and Blake Bradley's early years, except that they were both adopted at a young age by the Bradleys, a young couple who were also members of the Thunder Ninja Academy. It seems that both Bradleys shared a content childhood with their adoptive family, until they were later murdered by the fallen Wind Ninja, Lothor. Hunter and Blake unfortunately are unaware who is responsible for their deaths until years later. Following the death of their family, the boys continued to live at the Thunder Ninja Academy, now being raised by Sensei Omino.

Years later, both the Thunder and Wind Academies are attacked by Lothor, and nearly the entire population of both schools are taken captive by the space pirate. Fortunately, before being captured, Sensei Omino selects the Bradley boys to take the Thunder Morphers (which were developed in a joint effort between the Thunder and Wind Academies). With their new powers, and unfortunately unaware of who was responsible for the attacks, Hunter and Blake manage to make their escape.

Soon after, Lothor locates the Bradleys, and approaches them with the promise of avenging not only the capture of their school, but also the deaths of their parents. Lothor spins them a lie of how the Sensei of the Wind Academy Kanoi Watanabe, was responsible for their parent's murder. Since neither Blake nor Hunter know the truth, they agree to use their Ranger Powers and begin a full assault against the Wind Ninja Rangers and their Sensei. For a time, the two Rangers were forced to battle against each other, leading up Hunter and Blake infiltrating Ninja Ops, attacking Cameron Watanabe, and finally kidnapping Sensei Watanabe. However, before they able to kill the ninja master turned guinea pig, the ghosts of their parents appear to the Thunder Rangers revealing the truth of their deaths.

The Wind Rangers, although reluctantly, ask the Thunder Rangers to join them in their battle against Lothor. Yet, Hunter and Blake instead chose to leave for a while so as to come to grips with the truth of their parent's deaths and also to come to terms with their own misjudgments. In hopes to make up for their past mistakes, the boys attempt to infiltrate Lothor's Ship. Unfortunately, while they are on the ship, Choobo captures and brainwashes them so that they become a threat to the Wind Ninjas once more. Choobo traps the Wind and Thunder Rangers on an island so that they can kill each other, but the Thunder Rangers regain their memories. As a last resort, Lothor uses a ray that causes Hunter to fly into a rage and attack everyone. Hunter accidentally takes a breath of mist that makes him even more confused and angry, but the Wind Ninjas and Blake later help him come back to his senses. Following this, the Wind Rangers again offer to join forces with the Thunder Rangers, who this time accept.

Upon joining the Wind Rangers, Hunter and Blake get jobs with Dustin Brooks, at the local motocross shop, "Storm Chargers".

Although the pair agree to work with the Wind Rangers, trust and teamwork does not come quickly for them. There was particular aggression between Hunter and Shane Clarke, who battle for seniority and leadership, due to both being technically 'Red' Rangers. After a battle with another of Lothor's monster, the pair of them developed a sense of respect and trust for each other, although they maintain a friendly sort of rivalry.

The Wind and Thunder Rangers continue to fight against Lothor and his minions for several months, and soon they were joined by Cam, who took on the powers of the Green Samurai Ranger. Their adventure soon built up to final battle against Lothor who managed to strip of them their powers using the Abyss of Evil. Fortunately, the Wind Ninjas managed to use their elemental powers to overpower Lothor, leading to their foe being banished into the same Abyss that took their own powers.

Now without their Ranger Powers, the six former Power Rangers become official graduates of the Wind Academy. Shane, Tori and Dustin became teachers at the rebuilt Wind Ninja Academy under the command of head teacher Cam and his father, the newly re-human Sensei Watanabe. Hunter reveals that Sensei Omino is officially retiring and has asked Hunter to be the new head teacher at the Thunder Ninja Academy while his brother Blake continued his racing career.

TV STORY-Storm Before the Calm

The Thunder Rangers were featured in a chronicle of Power Ranger history compiled by Tommy Oliver shortly after he formed the Category:Dino Rangers, which was found by the nascent Ranger team in the Dino Lab.

After almost a year, Hunter becomes head instructor of the rebuilt Thunder Ninja Academy, Lothor finally manages to escape the Abyss of Evil, posing as Sensei Watanabe, returns Shane, Tori and Dustin their Wind Morphers which he then uses to brainwash them with evil Power Discs. They recapture the students of the Wind Ninja Academy.

Hunter is contacted by Cam receiving his message, for leaving his students from the Ninja Thunder Academy and appears with a Ninja Streak at the reunion point in Reefside encounter with Cam. When Blake also receives Cam's message appears at the indicate point of the reunion, the three watch the fight from above. They watch as the Wind Rangers and Lothor's forces beat the Dino Rangers. The Dino Rangers decide to regroup.

Cam, Hunter, and Blake enter the Abyss of Evil in search of their powers, when they enter in the Abyss of Evil, seeing the Samurai Amulet is being guarded by Zurgane, Bald Loser, Blue Face and several Kelzaks. Starting a fight, Hunter like the others fight against Lothor's forces, during the fight Hunter easily use efficient attacks against Blue Face and some Kelzaks.

When Cam was about to grab his Samurai Morpher, Zurgane execute an attack causing an earthquake in the Abyss of Evil, Blake was falling and when Zurgane and his troops leave, Hunter helps his brother by holding onto one of the stone pillars of the abyss, preventing them from falling, while Cam tries to help them. Fortunately, the real Sensei Kanoi Watanabe helped Hunter, Blake, and Cam and recover their Ninja Ranger powers. There they find and keep the good Ninja disks, for to give Shane, Tori and Dustin and escape the Abyss of Evil with Sensei.

In the Hubble Bridge, Shane, Tori, and Dustin have a duel with Dino Rangers Conner, Kira and Ethan unmorphed, when there were about to turn into their Ranger forms, Hunter, Cam, and Blake appear tricking and making them to believe that they joined Lothor's Army. But they trick them into taking the right Power Discs, which reverses Lothor's spell, Shane, Tori and Dustin return to the good side.

Back at the Dino Lab, the other Rangers listening on how Hunter, Blake, and Cam explain that Sensei came to their rescue just in time. All the Rangers are ready to take down Lothor. Tommy and Sensei remind them that this won't be easy and they will have to try their best.

The Dino Lab's screen shows Lothor and Mesogog's army, deducting that Lothor forms an alliance with Mesogog, all the Rangers going to the battlefield.

The Ninja Rangers and Dino Rangers morph into their Ranger forms and prepare for the battle. Hunter and Blake team up with Tommy the Black Dino Ranger against Zurgane, surrounding and damaging him. The three Rangers again attack Zurgane together, however, Hunter like Blake and Tommy receive Zurgane's thunder explosion. When Tommy was about to receive Zurgane's attack, he is protected by Blake using the Thunder Shield, while Hunter attacks Zurgane with his Crimson Blaster, Tommy attacks with an energy orb to Zurgane, as a result, together the Thunder Rangers and Tommy destroyed Zurgane.

Hunter along with the other Ninja Rangers and other Ranger teams are seen in Troy's premonition about the Legendary Battle.

After the apparently death of Vrak, Hunter is seen briefly with the other Rangers in Troy's premonition about the Legendary Battle.

Emperor Mavro was defeated, but the remaining thousands of X Borgs still stand. Tommy gathered all the existing Power Rangers, Hunter and his brother returned with his fellow Ninja Rangers and his powers are somehow fully restored, as part of the army of Legendary Rangers led by Tommy that helped the Mega Rangers to defeat the Armada once and for all, fighting in a huge battle against hundreds of X Borgs and dozens of Bruisers. After the demise of the X-Borgs, Tommy shook hands with Troy and teleported off along with Hunter and the Legendary Rangers.

The Thunder Rangers are not present in the crowd of Legendary Rangers used for original footage in Legendary Battle. They do, however, appear in the Sentai footage due to their counterparts indeed fighting in the Legend War.

Hunter ventually received Zordon's call through the Morphin Grid and was among numerous Rangers who rallied to his pocket dimension led by the Quantum Ranger for the last stand against Lord Drakkon, reunited in the Command Center.

During the battle on the moon of the World of the Coinless, Hunter and the rest of the Ninja Rangers (except Cam) driving the Storm Megazord they grouped with the other Rangers piloting their respective Megazords; Wild Force Megazord, Dragonzord Battle Mode and Shogun Megazord as they confront the evil Zord Serpentera. However, they are killed by the evil Zord.

Hunter's timeline was later restored by the Mighty Morphin Rangers after they defeated Drakkon. 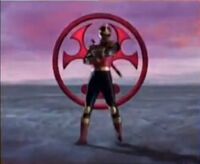