The Houou System (ホウオウ座系, Hōō-Za-Kei, Phoenix System) is one of the 88 constellation systems, part of the space dominated by the Space Shogunate Jark Matter, with its power embodied by its very own legendary Kyutama and Voyager wielded by the Kyuranger warrior.

Astronaut Tsurugi Ohtori was exploring the Houou System when an accident occured. However, he was saved when the Houou Kyutama awakened and revived him, making him an immortal as well as the first person in history to be granted a Kyutama. Space.30: All Right! The Miraculous Kyutama 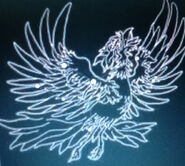 The Houou / Phoenix Constellation
Add a photo to this gallery

The Houou Kyutama (ホウオウキュータマ, Hōō Kyūtama, lit. Phoenix Nine Ball) is the Kyutama which embodies the constellation Phoenix; granting its owner the power of immortality, they can also use it to heal those on the brink of death though would put themself at risk. Awakened in the passing astronaut Tsurugi Ohtori, it allowed him to become Houou Soldier, granting him control of the Houou Voyager.

Houou Soldier
Add a photo to this gallery

Retrieved from "https://powerrangers.fandom.com/wiki/Houou_System?oldid=864189"
Community content is available under CC-BY-SA unless otherwise noted.