Houka is 22 years old at the beginning of Magiranger.[1]

Houka is the first daughter and second child of the Ozu Family.

She works as a fashion model when she feels like it.

A copy of MagiPink was created by Hades God Toad as part of the Evil Magirangers.

In the finale, she thanked Nai and Mea for reviving both her father and Hikaru despite both of them treating her badly in the past.

Houka's sole appearance in the "Versus Series", Magiranger vs. Dekaranger, is featured in the Super Sentai Versus Series Theater, hosted by the heroes of Tensou Sentai Goseiger. Eri (Gosei Pink) also dresses as Houka in the Dekaranger/Magiranger cosplay.

A few years later, Houka fought alongside not only her own team, but every single Sentai ranger in existence, against the Empire of Zangyack when it attacked the Earth in the Great Legend War. After fighting against hundreds of Gormin and their Zgormin commanders. Akarenger noticed the fleet moving towards them, he gathered all the Rangers together and gave them the order to sacrifice their powers to wipe out the first invasion's armada. Houka is one of several rangers (portrayed by a stand-in) who could be seen in the background when the Goseigers awoke after sacrificing their powers.

After the defeat of Ackdos Gill, the Gokaigers returned all the Ranger Keys to the former Sentai heroes. Houka made a brief appearance during the closing credits of Farewell Space Pirates, where she was shown receiving the MagiPink Ranger Key, allowing her to get her powers back and she said she'll meet them again soon. With the return of her key alongside those of the rest of her family, she resumed her duty as a Magiranger.

Ikura cosplays as Houka in the seventh episode of the first season of Hikonin Sentai Akibaranger.

Houka, alongside her team (MagiShine, MagiMother, and Wolzard Fire were absent), among the majority of the Super Sentai heroes, was caught up in the "Super Hero Taisen" incident which eventually resulted in the Super Sentai teams and Kamen Riders joining forces to defeat both Dai-Zangyack and Dai-Shocker. During the final battle, she is seen in the background with MagiGreen, Kamen Rider Double, and Accel fighting Doukoku Chimatsuri. The Magirangers teamed up with Kamen Rider Hibiki.

MagiPink appeared with her team among the first 38 Super Sentai whom collectively empowered Wild Tousai Shuriken King in its fight against the titanic Gillmarda, granting the Ninningers and Zyuohgers the power to perform the Zyuoh Ninnin Super Sentai Burst which destroyed Gillmarda with the combined power of all 40 Super Sentai.

Possibly during or after the final episode of Gokaiger, in which her powers are restored, Houka is eventually married and later having a daughter named Fuuka. She later meets Nanami Nono/Hurricane Blue and Jasmine/Deka Yellow, along with their respective children who are Fuuka's classmates at a school.

Houka joined the Super Sentai Strongest Battle as a member of Frivolous Team. It’s unknown whether she participated in the match, but her team lost the first round against the Leader Team.

Houka is cheerful and flighty, stringing along several boyfriends (as many as 15 at the same time). Her catchphrase is "Yahoo!". She has a narrow focus, and can be a troublemaker. However, she also sees everything in a positive light (except for the Infershia (Hades Warrior God Titan was the only exception), which can sometimes steer her into arguments with her older brother Makito.

She also has a tendency to refer to herself in third person, calling herself 'Houka-chan'.

Her primary attack is "Magi Magika Pink Storm" where she unleashes a whirlwind to blow opponents away, sometimes corporrated from her transformations. 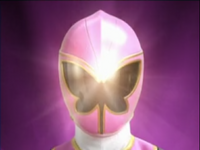 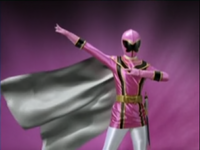 MagiFairy (マジフェアリー, MajiFearī): MagiPink's Majin Form. She wields the Fairy Cutter and can turn into the Magiranger Ball the others use in the Magi Shoot. Notably smaller than the others (as tall as MagiTaurus' head). Forms MagiDragon's head and MagiKing's "sternum".

In the Korean dub of Magiranger entitled Power Rangers Magic Force, which aired in South Korea, Houka is renamed Lucy.

The MagiPink Ranger Key (マジピンクレンジャーキー, Maji Pinku Renjā Kī) is Houka Ozu's personal Ranger Key and what became of her powers after she along with the rest of the 34 Super Sentai sacrificed their powers to end the Great Legend War.

This key along with the majority of the Ranger Keys were collected by the Red Pirates and later used by the Gokaigers. The MagiPink Ranger Key was mainly used by Ahim de Famille (Gokai Pink), who used it to fight as MagiPink.

The Magiranger keys, along with all the Ranger Keys of the first 33 Super Sentai, were briefly taken by the Black Cross King and turned into Ranger puppets that were fought by the Gokaigers and the Goseigers. Splitting up, the puppet MagiPink was defeated as part of a group of surviving Pink and White warrior keys by Gokai Pink and Super Gosei Pink.

After Zangyack were finally defeated, the Gokaigers gave the Ranger Keys back to their rightful owners. Houka received her key back, allowing her to become MagiPink once more. 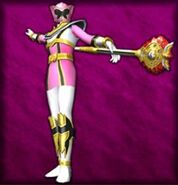 MagiPink is among the vast pantheon of Rangers which are available in the mobile game Super Sentai Battle Base, with his Legend Magiranger form also being available.

MagiPink appears with her team among all Sentai in the mobile game Super Sentai Legend Wars.