The most professional member of the team and second-in-command, Houji tends to be arrogant of his skills, and is extremely stubborn. He also does not allow his emotions and personal life to interfere with his job as a detective. Prone to blurting out English phrases, his catchphrases are "Perfect!" and "Super cool!", commonly said after finishing a criminal. He also tends to say "Unbelievable!" at things out of the ordinary, and when shocked or dismayed has yelled "Oh my God!".

He is an excellent sniper with superb accuracy when shooting. He clashed with Ban from the beginning, but it was later revealed that Ban had replaced his commanding officer as DekaRed and Houji had a hard time accepting it. He hated Ban even further as the latter constantly annoyed him by calling him "aibou", but he soon warmed up to Ban throughout the series, and eventually returned Ban's friendship. The two of them shared noticeable relationship developments, and while they constantly have their fights and squabbles, it is obvious that they do care about each other deep down: during a suicide mission Houji undertakes to save the world from a meteor powering a giant monster, Ban recklessly joins him to make sure he comes back to Earth to witness his sister's wedding. At the end of the series, Houji finally returns Ban's affection by calling him "aibou."

During the team-up with the Magirangers however, Houji became prominently annoyed and jealous when Ban pronounced Kai Ozu to be his new 'aibō' and called Houji 'moto aibō' (ex-partner). He has a younger sister Miwa, whom also tends to speak English phrases at times. She gets married later in the series. His number is 2.

Houji's appearances in the "Versus Series", Dekaranger vs. Abaranger and Magiranger vs. Dekaranger, are featured in the Super Sentai Versus Series Theater, hosted by the heroes of Tensou Sentai Goseiger. Hyde (Gosei Blue) also dresses as Hoji in the Dekaranger/Magiranger cosplay.

A few years later, Houji fought alongside not only his own team, but every single Sentai Ranger in existence, against the Empire of Zangnack when it attacked the Earth in the Great Legend War. After fighting against hundreds of Gormin and their Zgormin commanders. AkaRenger noticed the fleet moving towards them, he gathered all the Rangers together and gave them the order to sacrifice their powers to wipe out the first invasion's armada.

After the final battle against Zangyack, Doggie Kruger regained his powers and it can be assumed that all of the Dekarangers have their powers back.

Houji, alongside his team (DekaBreak, DekaMaster, and DekaSwan were absent), among the majority of the Super Sentai heroes, was caught up in the "Super Hero Taisen" incident which eventually resulted in the Super Sentai teams and Kamen Riders joining forces to defeat both Dai-Zangyack and Dai-Shocker. During the final battle, he is seen in the background fighting Deratsueigar, Gryllus Worm, and Rat Fangire.

DekaBlue appears as part of the five-man Dekaranger team alongside the other two Inordinate Sentai, Dekaranger and Jetman, in Season Two's alternate take on the events of the first season. The three official Sentai come to aid the Akibarangers in the final battle with the Stema Otsu Corporation.

as the three forces of super heroes confront Space Shocker

2 years prior to the events of 10 Years After, a case involving Doggie Kruger leaving him in a coma not waking up left Houji into a depression. He spend most of his time in the computer room making everyone around the base think he just in there playing games. In actuality, Houji was trying to solve the case to prove Doggie was innocent.

DekaBlue appeared with his team among the first 38 Super Sentai whom collectively empowered Wild Tousai Shuriken King in its fight against the titanic Gillmarda, granting the Ninningers and Zyuohgers the power to perform the Zyuoh Ninnin Super Sentai Burst which destroyed Gillmarda with the combined power of all 40 Super Sentai.

DekaBlue worked with his teammates in DekaWing Robo, transforming into the DekaWing Cannon wielded by Kyutama Gattai RyuTeiOh, to keep open the wormhole which would allow the Kyurangers to return to their own space.

He is cold, calculating, and can be short-tempered at times. Despite this, he does have a good heart and can be caring and compassionate at times, even to Ban. This was seen more in episode 48 where he hesitates to shoot Ban and like the others when he was told that Ban was dead, he cried alongside them.

DekaBlue's insert theme is BLUE is the SKY. 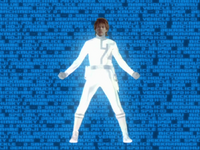 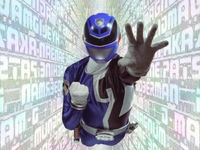 The DekaBlue Ranger Key (デカブルーレンジャーキー, Deka Burū Renjā Kī) is Houji Tomasu's personal Ranger Key and what became of his powers after he along with the rest of the 34 Super Sentai sacrificed their powers to end the Great Legend War.

This key along with the majority of the Ranger Keys were collected by the Red Pirates and later used by the Gokaigers. The DekaBlue Ranger Key was mainly used by Joe Gibken (Gokai Blue), who used it to fight as DekaBlue.

The Dekaranger keys, along with all the Ranger Keys of the first 33 Super Sentai, were briefly taken by the Black Cross King and turned into Ranger puppets that were fought by the Gokaigers and the Goseigers. Splitting up, the puppet DekaBlue was defeated as part of a group of surviving Blue warrior keys by Gokai Blue and Super Gosei Blue.

After Zangyack were finally defeated, the Gokaigers gave the Ranger Keys back to their rightful owners. Houji received his key and became DekaBlue once more. 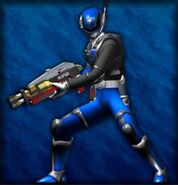 DekaBlue is among the vast pantheon of Rangers which are avaliable in the mobile game Super Sentai Battle Base, with his SWAT Mode being avaliable as well.

DekaBlue appears with his team among all Sentai in the mobile game Super Sentai Legend Wars.