A Date with Danger (In Space)

The Horror Bulls were a set of bison monsters used by Ecliptor. The first Horror Bull fought the Rangers in downtown Angel Grove plaza and copied all the data on the ranger's weapons in his jewel. When the monster was destroyed by the Quadro Blaster, the jewel survived and Ecliptor used it to put it on another Horror Bull. The jewel contained the information the first one collected on the Rangers. He used this against them as he could give them back the same attack. Zhane saved the Rangers with his weapon since his information was not scanned. The second one was eventually destroyed by the Astro Delta Megazord. 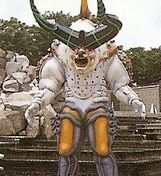 Horror Bull II
Add a photo to this gallery

Retrieved from "https://powerrangers.fandom.com/wiki/Horror_Bulls?oldid=1032865"
Community content is available under CC-BY-SA unless otherwise noted.