Homurakogi (ホムラコギ, Homurakogi) is an Ayakashi armed with twin Enma Daikarin (焔摩大火輪, Enma Daikarin Flame Mount Giant Fire Wheel) for both hands, which allows him to ride like a vehicle and unleash a fire trap. He also has red eye beams.

After being slain by the Shinkengers and the Go-Ongers on his first life, he joins Batcheed as they flee to the moon, only to become a living shield by Batcheed and be subsequently destroyed by the Origami and the Engines in their Mojikara Cannonball attack as they were in hot pursuit.

According to folklore, the oboroguruma (朧車, oboroguruma) is a yokai that takes the form of an oxcart with a face. The face on Homurakogi's abdomen and his flaming wheels are thought to be the origin of this legend. 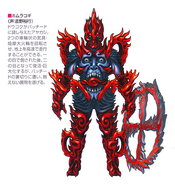