"Yeah, yeah! You're just a bit player, so back off! I'm the star!"
―Hitomidama upon arriving on the Rokumon Junk and shooing off Juzo.[src]

Hitomidama has the ability to fire a blast of energy from his face that is able to take control over his opponents, making them puppets to his will then commands them with his whip. He uses his ability on both the Tora Origami and Ryunosuke, having them fight for him. After Takeru frees Ryunosuke from Hitomidama's control, he frees the Tora Origami as the Ayakashi is destroyed by the Four Point Slash the and then destroyed by Tora ShinkenOh Tiger Drill Charge in second life.

According to folklore, the hitotsume-kozō (一つ目小僧, hitotsume-kozō) is a yokai that takes the form of a bald, one-eyed child. It is thought that Hitomidama's appearance was the origin of this legend. 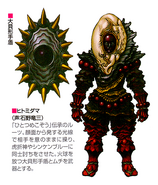