"Who knew being immobile would be so painful?"
―Hitman Mad Blast's first words[src]

"Back to freeze-compression?! You've got to be kidding me!"
―Hitman Mad Blast's first words being enlarged[src]

A catfish-like hitman who likes killing, taking items from his victims as mementos. Sealed for 15 years with not enough proof to confirm his crimes, he was the one who murdered Yuuri's family. Though Yuuri attempted to kill him, her real objective was to learn the identity of the one who paid him to commit the act, who was Don Dolnero. Brought in by TimeRobo Beta/TimeJet Gamma/TimeRobo Alpha after Yuuri gained her father's bracelet back from him. 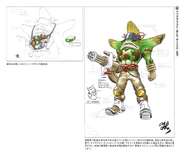