, which Hiromu appears as a supporting character to Yoko along with other Go-Busters. Kamen Rider × Super Sentai × Space Sheriff: Super Hero Taisen Z

Weak Point & Alektorophobia
After installed with the Vaccine Program, whenever he confronts, or just simply sees or hears anything related to something he fears, his body is instantly frozen, even in mid-air. Receiving immediate physical damage can instantly relieve this status. His only known phobia is the alektorophobia, since he had a psychological childhood trauma of being brutally attacked by chickens. Thus, the only known trigger to his Weak Point is chickens. 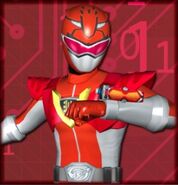 Retrieved from "https://powerrangers.fandom.com/wiki/Hiromu_Sakurada?oldid=897723"
Community content is available under CC-BY-SA unless otherwise noted.