Hikaru (ヒカル, Hikaru), true name Sungel (サンジェル, Sanjeru), is a Heavenly Saint, now known as MagiShine (マジシャイン, Maji Shain). Although not initially billed as a Sentai Ranger in-show, Hikaru identified with the Magirangers and acted as their Sixth Ranger.

Born as Sungel the Heavenly Saint, he was a student of Isamu Ozu alongside Raigel. However, the latter turned to evil in service of the Underground Hades Empire Infershia and turned Sungel into a frog although not before he himself was sealed away.

Sungel is given the name Hikaru whilst still a frog by Houka, after he saves the Ozu siblings from an enemy attack by creating a barrier of light as soon as they find him. After being overpowered by Garim the Gremlin, Urara kisses Hikaru after overcoming her fear of frogs. After becoming MagiShine and adopting the name Hikaru, he becomes the Magirangers' new mentor and comes to their aid whenever he is needed.

He was also the master of the feline genie Smoky the Magical Cat, having sealed him in the MagiLamp after he unwittingly got his hands on a treasure which would make him slowly disappear. Since Smoky is an orphan and a troublemaker, he started looking up to Sungel as a foster father since that incident (although he still acts mischievously from time to time).

Initially, Makito seems to be at odds with Hikaru, both because he feels displaced as the head of the family (since he is the older brother), and because his beloved, Eriko Ikeda, seems to have fallen for Hikaru as well. Due to this, Hikaru proposes a survival test for the Magirangers: he takes them to a Marudeyōna World and gives them the task of finding a ticket that will enable their return home - however, they have to do so without relying on their powers. Thanks to the test, Makito regains his confidence and starts to see Hikaru's guidance in a better light.

Hikaru is ordered by Snowgel at one point to learn a decisive lesson from Kai. Though he at first doesn't believe there is something that Kai can teach him, Hikaru eventually learns that over-thinking on a situation is often a big waste of time and it is often better to take immediate action instead, allowing Hikaru to overcome his fears of Hades God Drake and discovers where this seemingly invincible god's weak spot is.

Despite the initial animosity Urara feels towards his cool, superior attitude, they develop a relationship and eventually marry, merely instants before Absolute God N Ma launches his offensive against Magitopia.

TV STORY-Stage 47: The Magic Cast By You

Hikaru has foreseen his death at the hands of N Ma. And apparently the vision come true, when N Ma strikes him down when both Hikaru and Isamu confront him in Magitopia.

However, Hikaru is later revived by the Nightmare Sisters to fight N Ma at his wife's side. One year after N Ma's destruction, he lives in Magitopia with his wife Urara by his side.

Though he is not related to the Ozu family by blood, he considers his mentor Heavenly Saint Blagel as a father-like figure and can now amplify this since he is now Isamu's son-in-law.

Along with his brother-in-law Tsubasa, Hikaru appears in as he and Smoky are trapped in Time Demon God Chronos' Dimension along with the Boukenger core team. He transfers his "Love Spirit" power to AkaRed to power DaiVoyager into its Burning Legend form.

A few years later, Hikaru fights alongside not only his own team, but every single Sentai ranger in existence, against the Space Empire Zangyack when it attacks the Earth in the Great Legend War. After fighting against hundreds of Gormin and their Sugormin commanders. AkaRenger notices the fleet moving towards them so he gathers all pf the Rangers together and gave them the order to sacrifice their powers to wipe out the first invasion's armada.

After the defeat of Ackdos Gill, Captain Marvelous returns all the Ranger Keys to the former Sentai heroes. It is assumed Hikaru receives his key alongside his sister-in-law Houka, allowing for them to get their powers back

MagiShine appears with his team among the first 38 Super Sentai whom collectively empower Wild Tousai Shuriken King in its fight against the titanic Gillmarda, granting the Ninningers and Zyuohgers the power to perform the Zyuoh Ninnin Super Sentai Burst which destroys Gillmarda with the combined power of all 40 Super Sentai.

Hikaru joins the Super Sentai Strongest Battle as a member of Gilded Team. It’s unknown whether he participated in any of the matches, but his team is eliminated after losing the third round against the Super Strong Team.

Hikaru's exploits are said to be extraordinary, he also claims to have defeated the Cerberus himself. So he dislikes admitting any defeat in battle, something that Smoky often makes the object of teasing (such as the times when he was beaten up by King Glúm do Bridon or Hades God Drake). He has also shown to have some fascination with trains, as seen in Stage 22 when Houka takes him to Kyoto and they visit a train museum in the process. This makes sense since he is the conductor of the Magical Train Travelion Express. 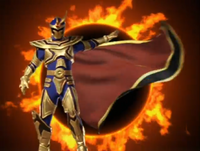 The MagiShine Ranger Key (マジシャインキー, Maji Shain Renjā Kī) is Hikaru Ozu's personal Ranger Key and what became of his powers after he along with the rest of the 34 Super Sentai sacrifice their powers to end the Great Legend War.

This key, along with the other fourteen Sixth Ranger keys and the ten extra hero keys, are initally acquired by Basco ta Jolokia and later used by the Gokaigers. Like all of his Ranger Keys, Basco uses his trumpet, the Rapparatta, to turn the MagiShine key into a puppet to do his bidding. The copy MagiShine was one of the remaining ten sixth rangers after the Gokaigers defeat the first five, with Basco using these ten to ambush the Gokaigers and take all of them hostage bar Marvelous. When Marvelous rescues them, they defeat all 10 puppets and claim the Ranger Keys.

A short while after, the first fourteen Sixth Ranger Reys, along with all the Ranger Keys of the first 33 Super Sentai, are briefly taken by the Black Cross King and turned into Ranger puppets that are fought by the Gokaigers and the Goseigers. The MagiShine key is among ten of these Sixth Ranger Keys who fight, and are defeated by, Gosei Knight.

While in the possession of the Gokaigers, the MagiShine Ranger Key was mainly used by Gai Ikari (Gokai Silver), who used it to fight as MagiShine. It was also used by Joe Gibken (Gokai Blue) on one occasion.

After Zangyack is finally defeated, the Gokaigers give the Ranger Keys back to their rightful owners. It is presumed that Hikaru received his key and became MagiShine once more.

MagiShine is among the vast pantheon of Rangers which are available in the mobile game Super Sentai Battle Base.

MagiShine appears with his team among all Sentai in the mobile game Super Sentai Legend Wars.