Highness Duke Org Ura (ハイネスデュークオルグ ウラ, Hainesu De~yūku Orugu Ura) was the second Highness Duke to be awakened, in response to Highness Duke Org Shuten's failure. He was effeminate with a nose-like face and ear-like projections on his back, as well as obsessed with collecting beautiful items.

When Highness Duke Shuten takes the fight to the Gaorangers, and it becomes clear he will fail, Ura is awakened in the Matrix. Shuten survives the fight against the Gaorangers, and was willing to continue to fight, but Ura arrives and extinguishes Shuten's remaining energy, killing his predecessor. He has the Duke Orgs, Tsuetsue and Yabaiba to bring him beautiful things, but while they try to bring in things like flowers and art, he used this opportunity as a distraction for the Gaorangers as he goes to awaken Duke Org Rouki. He uses a magic mirror to see things at a distance and carries a fan as his weapon. Through Rouki, Ura gains the four Gao Jewels that Rouki had stolen and uses them to create Chimera Org. However, the Org is beaten by the newly transformed GaoSilver, who also kills Ura.

Ura's crown is then used by Duchess Org Tsuetsue to become the Highness Duchess Onihime. But Ura regenerates himself from his crown and cultivates the Thousand-Year Evil, making it stronger with each host he creates for it. He also gives Tsuetsue and Yabaiba more power, changing their appearance. Soon enough, Ura captures GaoSilver to have him reabsorb the evil power. However after GaoSilver rejects it, Ura is able to absorb it to evolve into a more powerful form, Ultimate Form Ura (ウラ究極体, Ura Kyūkyoku-tai), which was his actual plan from the beginning.

With his new power, Ura kills the Gaorangers with only Kakeru Shishi and Shirogane the sole survivors of the first attack. The two Gaorangers try to fight Ura on their own until the others provide GaoRed with the Falcon Summoner and GaoFalcon as GaoGod revives them to aid in forming GaoIcarus, engaging in a dogfight before purging his body of the Thousand-Year Evil with Icarus Dynamite. Restored to normal, Ura is wounded by GaoSilver who destroys his crown and Ura is killed by the Gaorangers' Hyakuujuuken. With his death, the flowers that bloomed in the Matrix whither and Tsuetsue and Yabaiba revert to their original form, losing the power Ura provided.

Ura was later resurrected, fighting GaoSilver and GaoWhite in a vain attempt to protect the green idol in the forest that powers the barrier protecting the Matrix. Though he was killed, TsueTsue uses the Org Heart to fuse him with the others to create Ultimate Org Senki.

After absorbing the 1,000 year evil, Ura was given a greater power and a completely different look. Not even the HajaHyakujuken could kill Ura because of the 1,000 year evil. He managed to kill GaoBlue and severely damaging his power animal jewels. When GaoYellow and GaoBlack tried to defeat him with their weapons he manages to split into thin air and reforms to kill them as well. He then kills GaoWhite before she can use the GaoDeers' healing powers on her fallen comrades. In the afterlife, the 4 dead Gaorangers manage to assemble the relief, and GaoRed received the Falcon Summoner, managing to kill Ura in one shot. But he resurrects as a giant, only for GaoRed to receive the GaoFalcon power animal jewel. With GaoIcarus, they defeat him and he reverts to his normal form. On the Ground they use the HajaHyakujuken to kill him for good. 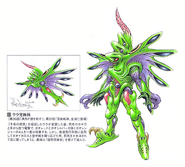