The Hercules System (ヘラクレス座系, Herakuresu-za-kei, Hercules System) is a star system whose Kyutama was among those collected by Shou Ronpo. As one of the 88 Constellations, it is part of the space dominated by the Space Shogunate Jark Matter, with its power embodied by its very own legendary Kyutama.

It is home to the planet Daguu. Uchu Sentai Kyuranger vs. Space Squad 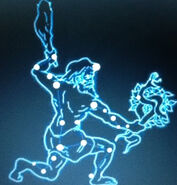 The Hercules Constellation
Add a photo to this gallery

Retrieved from "https://powerrangers.fandom.com/wiki/Hercules_System?oldid=865350"
Community content is available under CC-BY-SA unless otherwise noted.