A destructive, murderous, furry creature armed with a bazooka. Harbal was released by Gien to obtain the Lambda 2000 from the Kawasaki Lab. During the invasion, Harbel's attack had critically injured Mr. Asami. While Gien fought the Timerangers, he battled TimeFire. Once TimeFire defeats him, Harbal enlarged himself and battled V-Rex. Though Harbal was brought in by V-Rex Robo, Gien escapes with the Lambda 2000, thanks to Captain Ryuya's help. 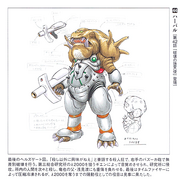