The Hebitsukai System (ヘビツカイ座系, Hebitsukai-Za-Kei, Snake-Bearer System) is a star system home to a planet inhabited by an extra-terrestrial human race from which Naga Ray heralds from. Long ago, his people purged their emotions in order to eliminate all conflict, becoming a race of stoics. As one of the 88 Constellations, it is part of the space dominated by the Space Shogunate Jark Matter, with its power embodied by its very own legendary Kyutama and Voyager wielded by the native Kyuranger warrior. 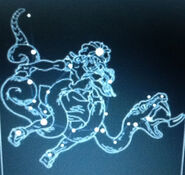 The Hebitsukai / Ophiuchus Constellation
Add a photo to this gallery

Long ago, the people of the Hebitsukai System were once individuals with highly intense and strong emotions. As recalled by Naga Ray, this led to them becoming increasingly filled with rage and anger, leading to widespread conflict. In a bid to restore peace, their emotions were suppressed within, thus preventing themselves from experiencing emotion again and eliminating individuality amongst the people. However, it is possible for these suppressed emotions to be reawakened again, as shown by Acanba awakening Naga Ray's emotions and turning him evil.

Hebitsukai Silver
Add a photo to this gallery

Retrieved from "https://powerrangers.fandom.com/wiki/Hebitsukai_System?oldid=864192"
Community content is available under CC-BY-SA unless otherwise noted.