"Standing up after being crushed by my baby-chan. I do applaud your guts."
―Sheik, operator of the first Shinobi Shadow[src] 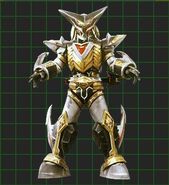 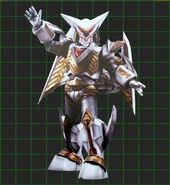 Shinobi Shadow 2's cockpit
Add a photo to this gallery

Shinobi Shadow was a ninja-themed mecha, first used by the mad bomber Alienizer, Sheik. In its first clash with the Dekaranger Robo, it managed to escape after hiding its true location via a cloaking device and multiple illusory copies. The second battle demonstrated additional capabilities- it now wielded a blowgun loaded with high-powered missiles. These missiles proved to be its undoing- when the Dekaranger Robo caught one between its fists and sent it right back, with the missile (which had been boosted to a thousand times its normal firepower) easily reducing Shinobi Shadow to a pile of burning slag.

Shinobi Shadow's legs would later be seen amongst the mecha scraps used to construct Frankenzaurus. Presumably these are from the one Sheik piloted, though they could be from another Shinobi Shadow of the same paint scheme.

The battle with Sheik was not the last the Dekarangers would see of this mecha model. A second Shinobi Shadow was used by the body-switching killer, Jinche, to raid a fuel refinery and steal a fresh fuel supply. The Dekaranger Robo quickly intercepted, but this second model flew off, and was only stopped when DekaBase Robo intercepted it, shooting it down with a Volcanic Buster blast.

This version may not have had all the ninja-like abilities of the original, or it's possible Jinche merely never used them. It did, however, use one move the original never demonstrated- firing a blue lightning bolt from its forehead. It also had a pair of wings for flight, a feature the original lacked altogether.

Retrieved from "https://powerrangers.fandom.com/wiki/Heavy_Industrial_Machine_Shinobi_Shadow?oldid=958761"
Community content is available under CC-BY-SA unless otherwise noted.