Return of the Prism

Hayley is a student at Summer Cove High School and the owner of a dog named Kody. It was during high school that she met Calvin and became a couple. Hayley and Calvin were in his truck, Nitro, getting it fixed when Mick landed in front of them. Ripcon finds them and Hayley drives them to the school's auto shop to get Mick's data com fixed. They learn from Brody through the com that the Ninja Steel was in his dad's trophy. During a fight with Ripperrat using sports equipment, the Nexus Prism lands with the Yellow and White power stars glowing. Hayley and Calvin pull them out, and with the others, they become Power Rangers with Hayley becoming the White Ranger.

When the Rafkonian Ranger Zayto from the Dino Fury Rangers read the Ninja Nexus Prism's mind he saw visions of multiples Rangers from the past, including one of Hayley getting her White Ninja Power Star.

Zayto brings up how different Ranger teams had motorcycles for transportation, showing Aiyon and Solon the Mighty Morphin Rangers' Shark Cycles and the Wild Force Rangers' Savage Cycles, later Zayto reveals that some cycles had firepower against a monster, showing her the Ninja Steel Rangers' Mega Morph Cycle. Aiyon believes a Mega Morph Cycle could give them enough firepower to defeat Wreckmate, but Solon reminds him that she does not have spare parts to build one.

When events set into motion by Lord Drakkon caused the timeline to split into pocket universe, each anchored on a powerset, the Ninja Rangers were split off into their own pocket universe. Lord Drakkon then attacked Brody, She uses Lion Fire Mode and summons the Ninja Super Steel Blaster to help Brody.

When the timeline was restored, so was Hayley.

Hayley along with The Ninja Steel Rangers are among all the Ranger teams which appear in the Korean-developed mobile game Power Rangers Dash.

The Ninja Rangers as seen in Power Rangers Dash.

Hayley along with The Ninja Steel Rangers are played characters in the game Ultimate Hero Clash 2, she is armed with her Ninja Star Blade and in her Ninja Master Mode using the Ninja Battle Morpher Bow Mode for her Special Attacks. 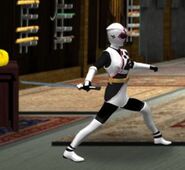 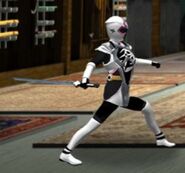 Hayley is an adventurous, smart, centered, competitive, and outdoorsy girl with a love of nature and healthy living. Her best friend is Sarah Thompson. Sarah would help Hayley when she'd have problems with Calvin or to even sabotage their parents' relationship. She and Calvin Maxwell are an ideal couple, they give each other gifts, Calvin picks her up in his truck for school, and they are always together during recess and other activities. When they face problems in their relationship, their friends and the actions they do help them realize they're always able to surpass every obstacle, like when Calvin was brainwashed, and Hayley went to the Warrior Dome to rescue him. She also loves animals as she would bring her Siberian Husky dog named Kody to school, he also became the inspiration for the name of her Zord, the Kodiak Zord.

Haley Fire White is Haley's power-up form accessed through the Lion Fire Power Star and Lion Fire Morpher, allowing him to fight with the power of the Lion Fire Zord.

Hayley switches bodies with the Gruesome Grunt, Jabberon in an attempt to trick the Halloween Intergalactic Court into putting her on trial in her place.

This form is exclusive to SNS Episode 25