Birds of a Feather
The Ninja Encounter, Part 2
The Fate of Lightspeed

"Well. So nice to see you again. Don't worry, we'll keep you company. He he. Come on boys, let's have a little fun."
―The Hatchasaurs' first words when being confronted by the Power Rangers and summoning some Z-Putties after Tommy demanded to know where the flower monster was.[src]

"It's time to change the rules of this little game!"
―Hatchasaurus before using Lord Zedd's enlargment grenade[src]

"That's it Power Rangers! You're finished!"
―The Hatchasaurs when charging at the Thunder Megazord and White Tigerzord after the Thunder Sabre supposedly destroyed Cardiatron and his final words before his death.[src]

Hatchasaurus is a bird/dinosaur themed monster created by Finster who possessed a magical speaking computer heart called Cardiatron who is able to re-assemble and enhance the monster after every time that he is destroyed. They serve as the main antagonists of the episode "Birds of a Feather" and Hatchasaurs alone serves as the main antagonist of the second part of the three part episode "The Ninja Encounter."

Hatchasaurus and Cardiatron were initially within an egg and Goldar mentioned that this monster once defeated the Dragonzord, though he didn't leave the Rangers any chances. Rita sent Hatchasaurus to Earth. Hatchasaurus encountered the Rangers but was quickly overpowered by the Dragonzord, taken down by the combined firepower of the Sabertooth Tiger, Triceratops, and Pterodactyl, and destroyed by the Tyrannosaurus' mist breath. However, Cardiatron brought him back so they formed the Megazord. Hatchasaurus easily wiped the floor with the Megazord and the Dragonzord had been rendered useless by Rita. Eventually however, Jason broke into the monster and activated his Dragon Shield, playing the Dragon Dagger which allowed the Dragonzord to break free with a boost of energy. Now free from Rita's spell,  the Dragonzord took down the monster with a strike to the chest with its tail at which point Jason and Cardiatron were thrown clear. With their comrade safe, the others summoned the Power Sword and again destroyed the monster. However, he again resurrected in his third and most powerful form and beat them senseless. Unfortunately for the Hatchasaurs, and despite Cardiatron's attempts to destroy him, Jason was unfazed and used the Power Sword and Dragon Dagger to destroy Cardiatron. With the monster now crippled and without any way to reform, Jason calls for Titanus and they form the Ultrazord which finishes off Hatchasaurus. Birds of a Feather

Hatchasaurus later reappeared in the second season when he was revived by the Terror Blossom to distract the Rangers whilst he planted seeds to bud into new versions of himself. This time around, he possessed the capability to speak with Cardiatron not speaking and was human sized instead of always being giant. Like the first time, the Rangers had to destroy Cardiatron, before they could destroy the monster completely. He originally summoned Putties but they were defeated so Lord Zedd made him grow. To defeat him for the first time, they merely took him down with the Thunder Megazord's Power Punch and destroyed him with its mist attack, but it quickly reassembled. The second time around, Hatchasaurs easily defeats the Rangers, using his eyebeams and some warts on his shoulders to his advantage. Eventually however, the Rangers managed to power up the Thunder Saber and slash him. Although the Hatchasaurs survives the Thunder Saber slash (which apparently destroyed Cardiatron inside of the Hatchasaurus), he was weakened enough to be taken out once and for all by the White Tigerzord's White Tiger Thunderbolts. The Ninja Encounter

Although he never returned to fight the Rangers again, the Hatchasaurus was later seen in the Shadow World. The Fate of Lightspeed 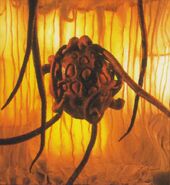 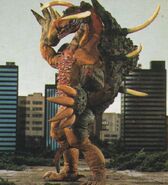 upgraded Hatchasaurus
Add a photo to this gallery

Retrieved from "https://powerrangers.fandom.com/wiki/Hatchasaurus_%26_Cardiatron?oldid=930731"
Community content is available under CC-BY-SA unless otherwise noted.