Ep. 1: The Great Gathering of 10 Sentai: Counting on You! Turboranger

A student body president and brightest student in the school. She is popular, everyone looks up to her. Gifted with acting skills, she was able to fool both Violent Demons and the other Turboranger to get the medicine to save Youhei's life.

Pink Turbo is among the Sentai warriors seen in clips when Miku Imamura (MegaPink) lectured Sae Taiga (GaoWhite) about the past female Super Sentai warriors and their shared mastery of disguise and habit of changing their clothing in the blink of an eye, something that Sae had never done before.

Years later, Haruna fought alongside not only her own team, but every single Sentai Ranger in existence, against the Empire of Zangyack when it attacked the Earth in the Great Legend War. After fighting against hundreds of Gormin and their Zgormin commanders. Kaijou noticed the fleet moving towards them, he gathered all the Rangers together and gave them the order to sacrifice their powers to wipe out the first invasion's armada. The Pink Turbo powers are later used by Ahim de Famille via the Ranger Keys.

After the Gokaigers defeated the second Zangyack invasion, Marvelous returned the Ranger keys to the Super Sentai, it is assumed Haruna and her team have their powers back.

Haruna, alongside her team, among the majority of the Super Sentai heroes, was caught up in the "Super Hero Taisen" incident which eventually resulted in the Super Sentai teams and Kamen Riders joining forces to defeat both Dai-Zangyack and Dai-Shocker. During the final battle, she is seen fighting Brobajell.

Pink Turbo appeared with her team among the first 38 Super Sentai whom collectively empowered Wild Tousai Shuriken King in its fight against the titanic Gillmarda, granting the Ninningers and Zyuohgers the power to perform the Zyuoh Ninnin Super Sentai Burst which destroyed Gillmarda with the combined power of all 40 Super Sentai.

Haruna joined the Super Sentai Strongest Battle as a member of Brain Team. It’s unknown whether she participated in any of the matches, but her team was eliminated either after losing the second round against the Gunman Team or the third round against the Swordsman Team.

As described by the Turboranger's teacher Misa Yamaguchi, Haruna is bright and cheerful

TV STORY-Ep. 17: The Teacher Who Became a Child. She is also an animal lover

TV STORY-Ep. 25: The Fighting Puppy. Aside from hanging out with her team mates Haruna also likes to go shopping and gossip with her high school girl friends 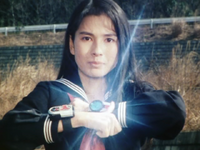 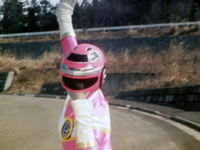 The Turborangers are prone to having their powers taken away by the Boma or running out of the fairy power empowering them; when they do, their entire suit outside their helmet visor becomes a pure white in color. This can be restored to the proper suit by restoring the fairy magic within them, generally through the power of their own youth.

The Pink Turbo Ranger Key (ピンクターボレンジャーキー, Pinku Tābo Renjā Kī) is Haruna Morikawa's personal Ranger Key and what became of her powers after she along with the rest of the 34 Super Sentai sacrificed their powers to end the Great Legend War.

This key along with the majority of the Ranger Keys were collected by the Red Pirates and later used by the Gokaigers. The Pink Turbo Ranger Key was mainly used by Ahim de Famille (Gokai Pink), who used it to fight as Pink Turbo.

The Turboranger keys, along with all the Ranger Keys of the first 33 Super Sentai, were briefly taken by the Black Cross King and turned into Ranger puppets that were fought by the Gokaigers and the Goseigers. The puppet Turborangers fired their V Turbo Bazooka alongside the Changemen, Flashmen, Maskmen, and Livemen, only to be swiftly defeated by the individual finisher attacks of the Gokaigers and Goseigers as they emerged from the resulting fireball.

After Zangyack were finally defeated, the Gokaigers gave the Ranger Keys back to their rightful owners. It is presumed that Haruna received her key and became Pink Turbo once more.

Haruna Morikawa/Pink Turbo: to be added

Pink Turbo is among the vast pantheon of Rangers which are available in the mobile game Super Sentai Battle Base.

Pink Turbo appears with her team among all Sentai in the mobile game Super Sentai Legend Wars.