The Super Sentai Hand-Off (スーパーり, Sūpā Sentai Yuzuri) is a Super Sentai tradition that started with the finale of Tokusou Sentai Dekaranger during the sponsor spot after the end credits (other Tokusatu series does the same). At the end of each Series Finale, the current Red Ranger meets the Red Ranger of the next series as a type of passing the torch ceremony. It only last a few seconds and rarely contains any words. The Hand-Offs remain part of their respective episodes for the DVD/Blu-Ray release.

MagiRed appears before DekaRed, by a stark black background through a spark of fire. Both Rangers give each other a high five, and turn their attention toward the viewers. 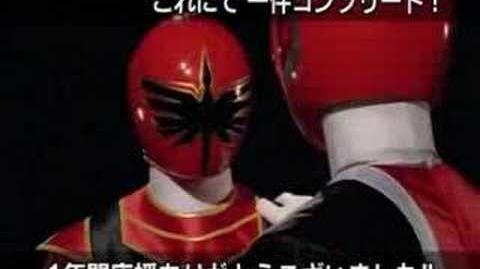 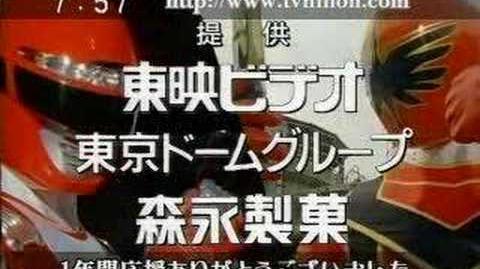 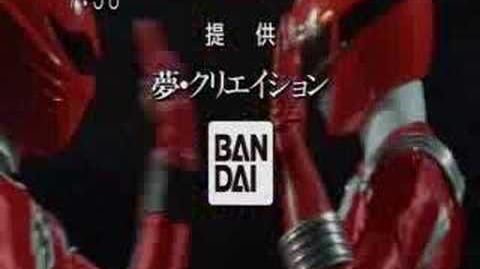 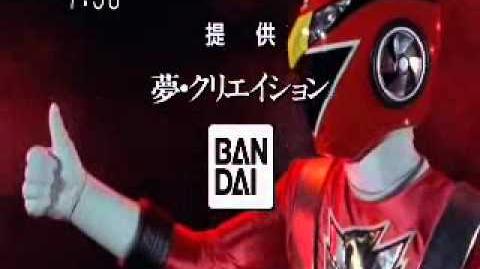 Go-On Red and Shinken Red draw their swords (Road Saber and Rekka Daizantou) and their swords clash, producing a cloud of red smoke. Go-On Red wishes Shinken Red luck, and both Rangers turn their attention toward the viewers. This is the first hand-off thus far where both Reds are not in the "black room" and are interacting in the real world until Lupinranger VS Patranger - Ryusoulger Hand-Off. (In the Magiranger/Boukenger hand-off, only MagiRed was in the real world) 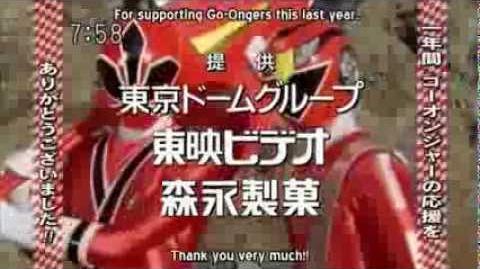 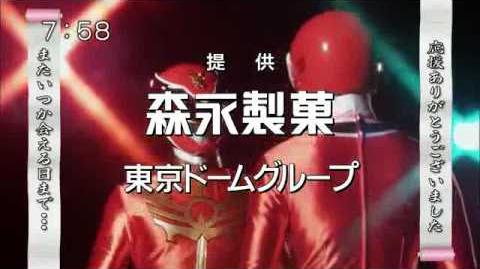 Goseiger - Gokaiger (Epic 50: Protecting the Planet is an Angel's Duty)

Gosei Red walks to Gokai Red, who slowly lands using a swinging rope, and nods that he makes a good landing. Before walking off, Gosei Red gives Gokai Red a high five, and the attention of the viewers are turned to Gokai Red while Gosei Red waves from behind. 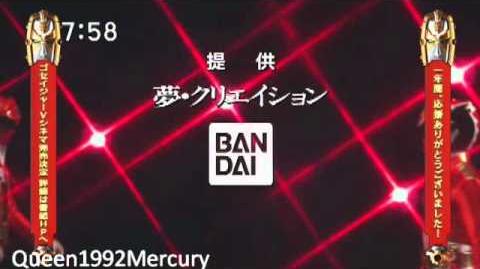 Red Buster rides up to Gokai Red on his motorcycle. After getting off, Gokai Red throws a punch which Red Buster stops, (The punch being the continuing responsibility). Gokai Red leaves shortly after. Red Buster quickly turns in the direction Gokai Red is headed towards and bows out of respect before reboarding his motorcycle and giving a "thumbs up" for the start of a mission. This is the first Hand-Off to involve another character, as Red Buster's motorcycle is Cheeda Nick. However, this is minor, as Nick does nothing more than be a normal motorcycle. 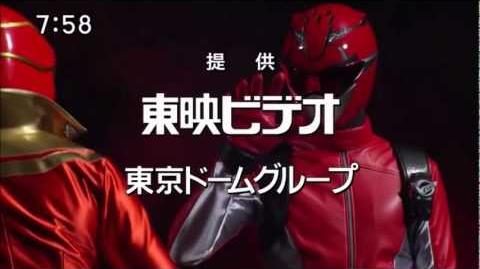 ToQ 1gou appears in front of Kyoryu Red wearing a pink costume, causing confusion until ToQ 1gou Transfer Changes into his normal red costume. The two then do a high-five before ToQ 1gou runs towards the camera as Kyoryu Red waves goodbye (to ToQ 1gou and, by extension, the viewers). First one to advertise McDonald's and the first one where the announcer is a man. 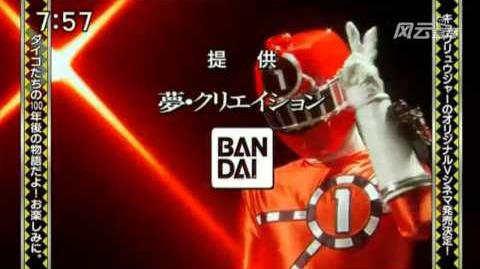 ToQ 1gou stretches as if he's tired when a puff of smoke appears and AkaNinger appears. He tries to attack, but ToQ 1gou sees it and slaps his fist gently while walking off. AkaNinger can be seen bowing as ToQ 1gou leaves 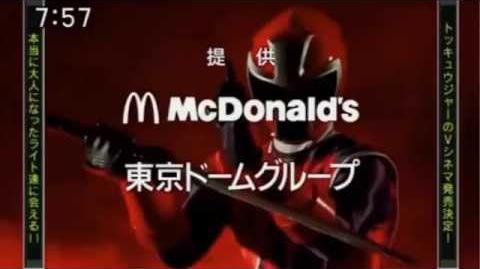 Juyong Kwon and Juhyeok Kwon use the Animal Force Dinocell, which summons the Animal Force Power Rangers (the Zyuohgers). Yamato Kazakiri de-morphs and then shakes Juyong's hand. This marks the first Hand-Off to feature the actual actors on screen as well as other Rangers aside from the main Red Rangers taking part. It is also the first Hand-Off from a sequel and non-Japanese Sentai show. 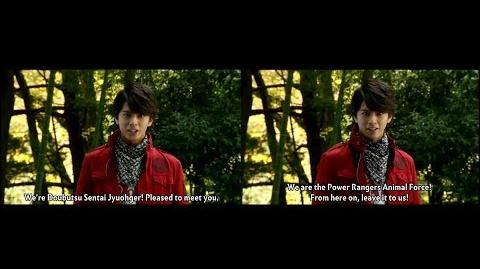 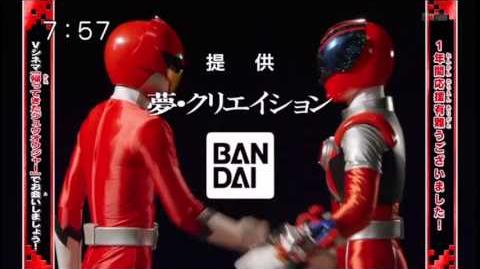 Shishi Red celebrating is interrupted by Lupin Red running in front of him; and then hiding from behind. Patren 1gou has his VS Changer ready to shoot Lupin Red, but Lupin Red is using Shishi Red as a shield. Shishi Red is knocked out of the way as the thief and cop Reds face off with each other and run off, leaving Shishi Red confused. This is the first hand-off to have more than two Reds. 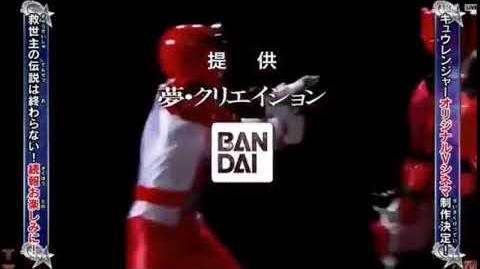 KyuuRanger to LupinRanger vs Patranger Handoff 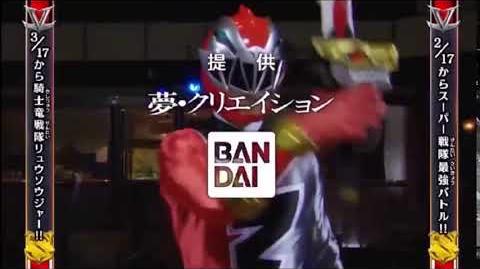 Lupinranger VS Patranger to Ryusoulger Handoff

Ryusoulger - Kiramager (Final Ep.: The Will of the Earth)

Ryusoul Red approaches Kiramai Red and waves at him while he poses in a shining version of the black room. Both Rangers give each other a high five, then Kiramai Red does another pose while facing the viewers. This is the first Hand-Off with two Reds since the Zyuohger - Kyuranger Hand-Off.

Zenkaizer sneaks behind DonMomotaro and pounces on him, but DonMomotaro throws Zenkaizer to the ground. DonMomotaro picks Zenkaizer back up. This is the second handoff that one of the participants is not a Red Ranger. It is also the first hand-off where half of it takes place outside, and the first to take place with a fully detailed art background instead of just a black room.

The Hand-Offs are recreated in the Super Skill sequences of Super Sentai Legend Wars.