Jiin (ジーン, Jīn, 19-21) is the youngest of the Hell Demon Siblings under Dark King Zylpheeza

Jiin works with his siblings after being summoned by Zylpheeza to create discredit for GoGoFive by destroying major sections of the city with his brother Zoodo's feather bombs while using his extreme speed to keep the team from responding as quickly as required and thus leading to their first major failure. After the team regroups, Jiin continues to work alongside his siblings until Zoodo is killed by the team.

When Zylpheeza becomes worried about his mother Grandiene taking his power and replacing him with his youngest brother Drop, Guuru and Jiin once again return to battle. Daimon and Matsuri face his, baring with her super-speed until Matsuri gets an idea of creating rubble within an abandoned building to directly hit and hinder Jiin's speed abilities.

By the time Jiin returns to battle, he decides to let his brother Guuru fight believing in the fairness of the "game" that the Hell Siblings partake in. Angered by this fairness, Zylpheeza kills Jiin and immediately revives his with a Hades Card for his own scheme which required his removed. With his joining the giant Guuru, GoGoFive has a hard time holding both off until Mondo decides to release their new secret weapon: Liner Boy. Using his quick speed and solar-powered lasers, Jiin is ultimately killed alongside his brother Guuru.

His main attribute is his super-speed, which can whisk by and outpace any opponent; he also uses a spear in combat. After growing via the Hades Card, he takes on a draconian appearance. 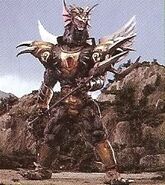 Giant Jiin
Add a photo to this gallery

Retrieved from "https://powerrangers.fandom.com/wiki/Hades_Dread_Knight_Jiin?oldid=1049038"
Community content is available under CC-BY-SA unless otherwise noted.