The Hades Beastman Berserker King Glúm do Bridon (冥獣人バーサーカー・グルーム・ド・ブライドン, Meijūjin Bāzākā Kingu Gurūmu do Bridon) is King of the Hades Beastmen Berserkers (冥獣人バーサーカ, Meijūjin Bāzākā), the strongest species of Underground Hades Empire Infershia's warriors. Seeking battle even in death, their undying souls cling to their King's armor. As Infershian legends say, should the King of the Hades Beastman Berserkers and a pure-hearted human girl marry, all the spirits trapped in the armor would be resurrected into the world.

Glúm kidnapped Yuka Yamazaki to be his bride in order to bring his army of Hades Beastman Berserkers into the world. He used the Puppet's Ring that absorbed the souls of humans to put Yuka under his control and make her love him. He wore a helmet that concealed his hideous face. As the type of Hades Beastman he is, once he becomes furious, spikes shoot out from his armor, even from his face plate and his strength and defense doubles. During the wedding, he wore a cape. He wielded a glaive that could also turn into a sword or gun.

His marriage would have been successful, if Kai Ozu hadn't intervened. He was consumed by his minion Ultra Hades Beast Living Sword to become Sword of Glúm, only to be killed by SaintKaiser, with MagiDragon and Magical IronMan Travelion's aid. 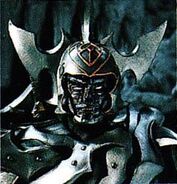 without mask
Add a photo to this gallery

Retrieved from "https://powerrangers.fandom.com/wiki/Hades_Beastman_Beserker_King_Glúm_do_Bridon?oldid=959384"
Community content is available under CC-BY-SA unless otherwise noted.