Hachouchin (ハチョウチン, Hachōchin, 14) is an Ayakashi that has the features of an elephant and is capable of breathing fire.

Being extremely short tempered, he actually provoked Dokoku Chimatsuri out of not being called forth before Dayu Usukawa convinces him to turn his anger issue on the humans. When the Shinkengers attempt to fight him, they learn that only Shinken Blue's Water Mojikara can wound him (since he was immune to fire and wind just made him stronger with earth and nature being useless against his fire based attacks). He was first destroyed by the Kajiki Five Rings Bullet which Ryunosuke and Richard Brown wielded together. He then gained his second life but was then destroyed by Tenkuu ShinkenOh with its Tenkuu Bamboo Slash.

This monster's most powerful attack is an unnamed move where he turns into a giant fireball and slams into his enemies with enough force to take down and demorph all five Shinkengers and ShinkenBrown with a single hit.

According to folklore, the chōchin-obake (提灯お化け, chōchin-obake) is a yokai that takes the form of a paper lantern. Hachouchin's fiery, lantern-like appearance is thought to be the basis of this legend. 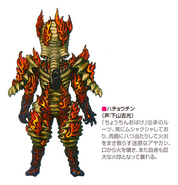