The Grim Reaper Minosaur (グリム・リーパーマイナソー, Gurimu Rīpā Mainasō) is a Grim Reaper-themed Minosaur monster from the Warfare Tribe Druidon, accidentally created from Anikin, a star of AnikinTV, based on his desire for his dance collaboration video starring Kleon to be a success. 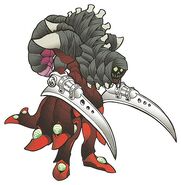